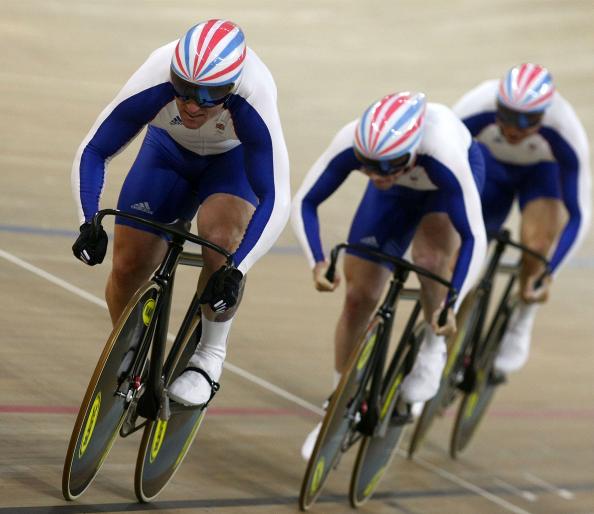 Track cycling is not an Olympic sport for the faint of heart.

Competitors reach speeds of over 50 mph at certain moments, weaving around each other in a frenzy of wheels and gears as competitors jockey for position, looking to hold their spot or make a move to break ahead. The threat of crashing is very real.

Track cycling races are held on a heavily banked racetrack called a velodrome, which allows cyclists to maintain their high speeds as they whiz past spectators. And like track and field events, there are both sprint and endurance events.

Track cycling is especially popular in Europe—particularly Germany, the UK, France, and Belgium—but it was once a popular spectator sport in the U.S., peaking in the 1930s when six-day track cycling races were frequently held in Madison Square Garden.

WHAT IT TAKES TO BE A TRACK CYCLIST

Track cycling requires heroic levels of leg strength and cardiovascular endurance to keep the bikes moving at such ridiculously high speeds, regardless of the fact that the bikes are some of the most aerodynamic and efficient in the world. There are, of course, other exercises that can facilitate progress on the track, but the low impact nature of biking makes it simpler to just hop on and develop legs and cardio that way, while improving skills in the sport itself as well.

“When we talk sprinting—going fast on the bicycle, [I believe] doing long distance riding will actually make you quicker,” says Jamie Staff, a former cycling champion—he won Olympic gold for Great Britain in the team sprint in 2008—who switched to track cycling in his 30s after being named World BMX champion in 1996. “From my perspective, the fitter you are, the easier all the other stuff is and the quicker you recover. So, the fitter my guys are, every time they’re coming for track sessions, I think they’re recovering quicker off the end of [them] and they’re recovering post session, so for the next set, they’re coming in fresher as well.”

Staff, who coaches some of the top U.S. track cyclists, sent six athletes to the London Olympics in 2012. His riders trained 20 hours a week, spread over six days, with workouts of both road cycling and gym sessions in addition to a steady diet of track riding athletes work on different aspects and skills needed in track cycling races, shifting focus from day to day.

Not every track cyclist trains with long-distance rides—and not every coach endorses it—but it’s hard to argue with a guy who claimed a gold medal in his mid-30s, particularly in a sport where the peak age is usually in the early to mid-20s.

7 MOVES YOU SHOULD AVOID IN YOUR BACK WORKOUTS