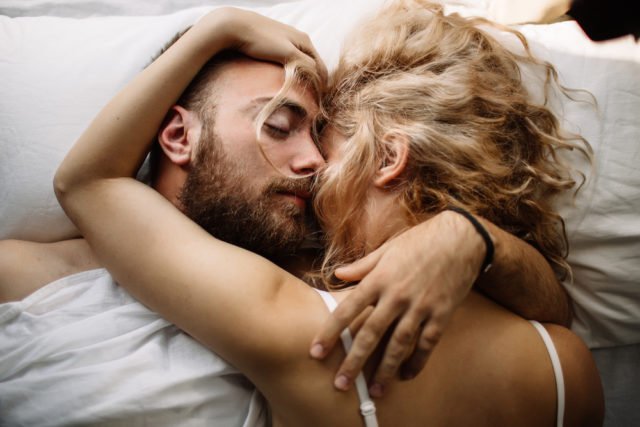 Bad news, guys: Sex might not get better with age and it could even kill you in your golden years if you do it frequently enough and—here’s the kicker—really enjoy it, according to new research from Michigan State University.

That wasn’t the case for women, though. Having great sex in older age lowers a woman’s risk for high blood pressure and curbs her risk for heart attack, heart failure, and stroke five years down the road.

While discouraging, it’s not entirely shocking. Sex, for men, can put a big strain on your body—even when you’re not in your 60s, and beyond. And as you age, become weaker and lose muscle mass, you struggle and work harder to overcome any sexual problems and elusive orgasm.

“Because older men have more difficulties reaching orgasm for medical or emotional reasons than do their younger counterparts, they may exert themselves to a greater degree of exhaustion and create more stress on their cardiovascular system in order to achieve climax,” Liu adds.

But that doesn’t mean you have to become celibate after your 60th or 70th birthday. Here are some steps you can take to stay healthy—and enjoy sex for the rest of your life.

Don’t Take Testosterone
The researchers believe taking supplements or pills to boost your testosterone levels and sexual function can hurt you in the long run. “Although scientific evidence is still rare,” Liu said, “it is likely that such sexual medication or supplements have negative effects on older men’s cardiovascular health.”

Find a Balance
While an occasional romp between the sheets may promote health among older men, having sex too frequently or getting a little too ambitious could put you at risk for cardiovascular problems. Don’t go on a marathon sex session after a sex drought and be mindful as you age that you probably can’t pull off the sex stunts you used to—even stunts as simple and seemingly harmless as having sex every other night.

Talk to Your Doctor
“Physicians should talk to older male patients about potential risks of high levels of sexual activity and perhaps screen those who frequently have sex for cardiovascular issues,” Liu says.

Get Fit and Stay Healthy
If you adopt a training regimen that bolsters your heart health and is something you can maintain well into old age (say, swimming and/or light resistance training) you’ll lower your risk factors for heart attack, heart failure, and stroke. And of course, get in the vigorous exercise now while you can; interval training is great for improving your heart health. Try rowing, HIIT, sprints, and spin classes now; when you’re older, fit in intervals while walking or work out with light weights.