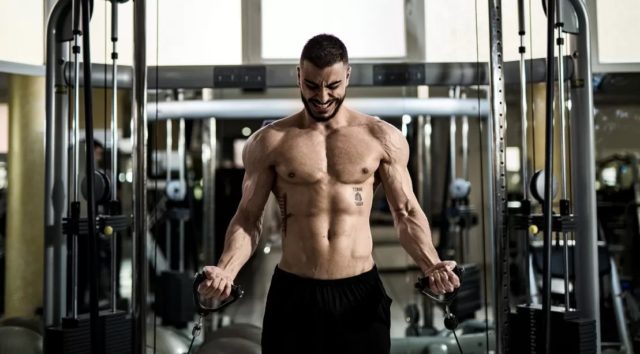 No one who benches 180kg for reps started at 180kg —it just doesn’t work that way. They had to go through hundreds of hours in the gym and dozens of other mini-milestones before hitting that bar-bending mark. They had to work up to it—five pounds more this week, 10 more the next. Building on the previous workout is what eventually amounts to four plates on each side of the bar. What if a rookie lifter tried to press 180 without that kind of calculated progression? Well, it wouldn’t be pretty.

The same approach applies to plowing through stores of unwanted body fat, which we’re sure is on your mind after your standard winter of gluttony. Take a look at your sugar-cookied, holiday-wrecked midsection. You can’t pick just one slim-quick method and hope to get rid of that doughy gut by beach time. You have to work toward it. As with weight training, consistently adding new variables into your program—especially when they build on what you’ve done previously—will not only accelerate your fat-burning but also keep your body from getting used to one particular approach.

While making a whole-hearted commitment to fitness as a lifestyle is really the only way to keep those love handles in check for good, we can help you build some serious blubber-melting momentum with our six-week program. If you incorporate one or two new fat-burning strategies each week, by the end of Week 6, you’ll be firing on ten strategic cylinders. There’s no question about it—this year, your six-pack is sure to make an unseasonably early cameo.

Follow these steps over the next six weeks to increase your body’s ability to burn fat.

Week 1: Reduce carbs by half for four days

Week 4: Schedule 40 minutes of medium- to high-intensity cardio postworkout or first thing in the morning

Week 6: Take a three-day break from the entire plan, then start again if needed

Strategy 1: Cut Carbs in Half

When carbohydrate intake is lowered, the body turns to fat for energy. So to start shedding some fat, cut your carbs drastically—in this case, by half—for four straight days while maintaining your regular workout plan. Not only does this reduce calories, but it also helps control insulin, the hormone released with carb consumption that can increase the appetite.

The easiest way to implement this step is to halve your carbohydrate portion size at meals. Instead of a full bagel, for example, eat half. In lieu of a medium plate of pasta, have a small plate. Eat only three-quarters of a cup of rice compared to the rounded cup you may typically consume. You’ll burn fat and your desire to eat should also subside.

Following a lower-carb diet for too long can backfire for some, decreasing leptin levels and slowing the metabolism, so return to your regular portions after four days. Introducing carbs back into your diet after this kind of drastic reduction kicks up leptin levels and, therefore, your metabolism. In addition, when the body comes out of a brief, modified lower-carb diet, it becomes more efficient at storing carbohydrate as muscle glycogen, key for pushing through your workouts with the type of intensity you need to elicit growth. Glycogen not only powers your training but acts as an anabolic stimulus, allowing the body to retain muscle even as you attempt to whittle away a few extra pounds. And because it pulls water into the muscles with it, it makes them fuller and larger.

Yes, getting lean is about calories, but it’s also about hormones, so we’ll go ahead and cover all your bases just to be safe. Happily, this will be a bedtime chore and, over the next six weeks, should become as routine as brushing yout teeth. To make it a bit simpler and to get your hormones working in your favor, drop all carbohydrates from your final meal of the day—every day—to slash calories. When you go to bed with a lower blood-sugar level as a result of avoiding carbs in your last meal, the body is more apt to increase its production of growth hormone (GH), which accelerates fat loss by mildly increasing the metabolism and boosting muscle growth.

Also, try adding arginine to your list of supplements to increase GH levels. Arginine, which converts to nitric oxide in the body and increases blood flow, has also been shown to boost the release of GH and support metabolism. In addition to supplementing with 3-6g in the morning on an empty stomach, take 3-6g of arginine before going to bed.

Many cut-up plans use the shock-and-awe method: They require not only drastic diet alterations but long, heavy bouts of cardio. Truth is, you don’t need a lot of cardio to trim the fat if your diet is solid. Losing fat is the cumulative result of what you eat, how you eat and how much you eat, coupled with hardcore weight training. Yet cardio certainly has its place as a stimulus.

Used in moderation, cardio allows you to get over fat-loss plateaus without altering your diet too much. This week, do two moderate sessions (yes, just two) of 30-40 minutes apiece. That’s enough to facilitate fat loss. Remember, the body isn’t a machine. If you try to force fat off, it can backfire, with the body downgrading its metabolism and the amount of calories it burns in response to exercise and diet.

Strategy 4: Get Lean With Protein & Leucine

By the second week, after you’ve cut carbs and increased your cardio, the body will start to look for alternatives to body fat for fuel. Unfortunately, muscle tissue is often its first source. You can reduce that effect by increasing your regular protein intake by 50g per day. Either add a protein shake or two or increase your protein intake at the meals you eat before and after training—another 25g preworkout and postworkout should do the trick. That’s a second scoop of whey protein or about 3-4 ounces of chicken, fish or lean meat.

You can also add a leucine supplement before and after training. Leucine can halt muscle breakdown, aka catabolism. The unfortunate part of attempting to get leaner is that the body often tears down protein, including muscle tissue, at a far greater clip than when calories and carbs are much higher. So to prevent the loss of protein and muscle tissue and the dropoff in metabolism that comes with it, add 5-8g of leucine preworkout and postworkout.

Strategy 5: Burn, Baby, Burn
Unfortunately, most folks stumble out of the gate by pinning their hopes to a fat-burning supplement without ever getting their diets in order.

But if you’ve done your homework and gotten your body into a fat-burning mode with the previous steps, a decent fat-burner can go a long way. Look for something that includes ingredients such as green tea, caffeine and evodiamine, which boost fat-burning and make the body less efficient at storing calories as body fat. The biggest advantage to putting off the fat-burners until Week 3 is that you’ve already moved your body in the right direction with your diet. Adding some help should result in more noticeable progress.

Getting lean is about calorie reduction, hormonal manipulation and exercise. But it’s also about perception. When you make a drastic drop in calories, the body perceives this as a threat and begins to tap into other fuel sources, fat being chief among them.

So for one of your four low-carb days during the week, slash carbs even further—to nearly a quarter of your normal intake—to increase fat-burning. Anyone can diet really hard for a day in the name of getting shredded, right?

You’re already working up a small sweat twice a week. Now it’s time to trick your body by taking your cardio into another universe. Starting this week, add 40 minutes of moderate- to high-intensity cardio to the end of your regular weight workouts or first thing in the morning, before you eat. Because your body is carb-depleted at both of these times, an aggressive cardio session will help you tap into your fat stores more quickly. Plus, the duration and intensity of the sessions will challenge your body and spur your metabolism. Do this for only the final weeks of your program. Too much high-intensity cardio can kill testosterone levels, which could halt muscle growth and slow metabolism.

Strategy 8: Be A Cheater

Eating foods that are way outside of the dieting realm, or cheating, has gained a lot of attention in the fitness mainstream in recent years. One notion holds that eating whatever you want for an entire day each week keeps the metabolism humming. Sorry, folks, but it’s not that easy. Cramming down Krispy Kremes and buffalo wings all day Sunday isn’t the best way to go.

Cheating definitely has its place any time you’re trying to get lean, but the type of cheating we’re referring to won’t wreck your momentum. This week, on your first higher-carb day, have a burger, a couple of slices of pizza or a single slice of cake. In the grand scheme of things, the extra 500-700 calories won’t put a dent in your progress. By this time you’ll have already peeled away 5-9 pounds of body fat and your metabolism will be working at a roadrunner’s pace.

Volume training, or using more sets than usual in your typical training regimen, can accelerate fat loss, especially if your body is already in a strong fat-burning mode. It does this by putting additional stress on glycogen stores, depleting muscles of this valuable asset. When glycogen temporarily runs lower—as it would during a volume-training phase—fat-burning is given a healthy boost. This week, simply add 50% more sets to your typical training plan. Doing 12 sets per bodypart? Go up to 18. You can add sets to your current exercises or tack an additional 1-2 exercises onto your plan. Keep reps higher, in the 10-15 range. But make this just a one-week fix in your leaning-out cycle. Sticking to a greater-volume mind-set could eventually erode training intensity by lowering glycogen stores.

Ever take a break from training for 3-4 days, only to swear you look bigger and leaner? You’re not imagining things. That’s the beauty of rest. When you push the body all the time, it gets stubborn and does the exact opposite of what you’re trying to accomplish. Take a break for three full days this week, then get right back on the plan listed above—your body will respond with even greater progress and gains.

BY CHRIS ACETO AND ERIC VELAZQUEZ

Do I need to stretch after workouts?

The Best GPS Watch Functions To Elevate Your Workouts.