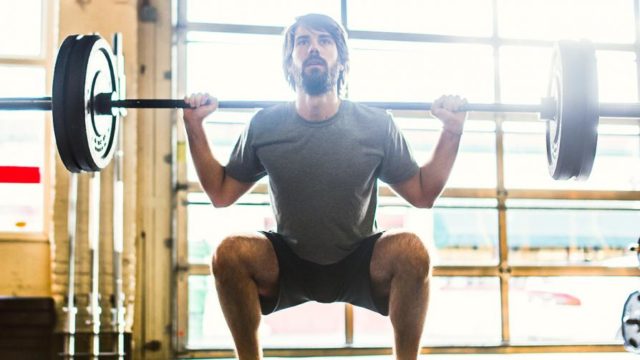 IT’S THE ULTIMATE fallback for any guy who has trouble adding muscle: “I’m a hardgainer! Guys like me just can’t get big and strong—it’s not in our DNA,” they say.

And sure, there are certain genetic advantages one person will always have over another—height, being able to touch his tongue to the tip of his nose, etc. But there’s no reason any guy can’t make awesome gains (even you, beanpole). The so-called hardgainer is typically a lanky guy whose long arms and legs make for poor levers with which to lift; his muscle-fiber composition and hormones cause gains to come more slowly than a natural athlete’s would.

But this isn’t a medically identified condition, and it’s certainly not a sentence to a life of smallness—in fact, it’s often just an excuse, according to Charles Staley, a strength coach with 30 years’ training experience (targetfocusfitness.com). What’s the solution? Stay the course with the same approach to training that any smart lifter would use, but pay particular attention to these three rules, which can turn hardgainers into hardbodies once and for all.

In 2011, the Journal of Strength and Conditioning Research found that subjects who trained the whole body each session thrice weekly got the same results as those who did an upper-lower split over four training days, with both groups completing the same total sets. So as long as you do the work, it would seem it doesn’t matter how often you go to the gym to do it.

Still, Staley recommends sticking with the three-day, full-body model, which forces you to limit the work you do for each muscle group in a single session. This prevents overzealous trainees (including hardgainers) from doing more work than they can handle. Every workout should begin with a variation of the squat, bench press, or deadlift, then follow with dumbbell and machine exercises. For instance, you could start with squats, then hit a dumbbell bench press and cable row.

Hardgainers believe that conventional training doesn’t work for them, so they love to experiment with advanced methods, like dropsets and forced reps. “I don’t like bringing in the heavy artillery until you’ve already made some good gains,” says Staley. “But novelty alone is a big stimulus for muscle growth.”

You can change up your workouts and shock your muscles more simply and safely by switching back and forth between periods of higher-rep training and heavy lifting. “For three to six weeks, train with reps in the six to 12 range,” says Staley—that targets pure muscle growth best. Then spend the same amount of time doing sets of three to five reps, which builds strength more optimally. Repeating this contrast provides big gains over time. “Try to increase the weight and sets each workout,” Staley says.

So you might start with two sets per lift and increase it to five sets over four weeks. “Pile up the sets until you don’t get sore anymore, then start a new phase with new exercises.” Soreness isn’t the best indicator of progress, but if you’re never sore from a lift, it probably means that your body has gotten too efficient at performing it to spur new growth.

Choose the best lifts for you

“If you can’t grow quads because you have long femurs,” says Staley, “maybe back squats aren’t the best thing for you.” Long-legged lifters often find they have to bend their torsos forward more to complete the lift, and that can risk injury to the lower back as well as shortchange the quads of stimulus. In this case, Staley recommends including more leg presses and hack squats in your program to target the thighs more directly.

By the same token, if you have long arms, touching the bar to your chest on a bench press isn’t necessary. Instead, says Staley, “do floor presses so the range-of-motion isn’t so big,” which allows you to use heavier weights more safely. A 2012 study found that lifters who used a partial range gained the same biceps thickness as those who used a full range. Dumbbell and machine pressing, which you can do with a full range, are good options as well to keep your strength balanced.