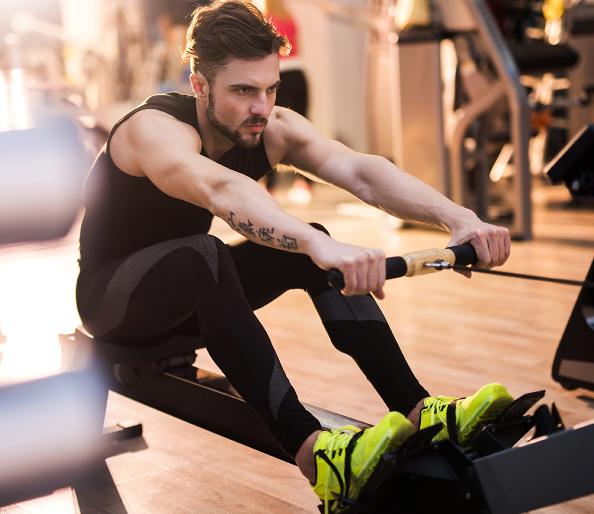 You may have noticed a rowing machine, otherwise known as an ergometer or “erg,” gathering dust in the corner of your neighborhood gym or as Frank and Claire Underwood’s workout of choice in House of Cards. If you’re a CrossFitter, there’s a good chance you’ve probably even used one in a workout before.

There’s also a good chance you’re using it all wrong.

While the rowing machine is an incredibly efficient, full-body workout that allows the athlete to build aerobic endurance and muscular strength at the same time, a lack of proper technique and training is common among gym-goers and can lead to injuries and misuse. So we asked experts from the number one collegiate men’s crew team in the country at the University of California – Berkeley—Head Coach Mike Teti and Associate Head Coach Scott Frandsen—to give you the lowdown on everything you need to know about the rowing machine. Both are Olympic medalists (Teti is both a medalist as an athlete and a coach) who know exactly what it takes, in the gym and on the water, to get in gold medal-winning shape.

In order to get the most out of your time on the rowing machine you should:

– Incorporate these erg workouts into your fitness routine.

– Make sure to avoid the following common mistakes and always keep an eye on technical focuses during the workout, even when you’re feeling fatigued.

– Take some time to get to know the machine itself and understand the way the screen settings work.

Olympic rowers and experienced collegiate crews make the rowing stroke look easy and pretty darn effortless. But make no mistake, the rowing stroke is nuanced, complex, and can take years to master on the water. Luckily for those of you at the gym, the erg is a far simpler machine that can be perfected with some basic knowledge of technique and a little bit of practice.

The “catch” is the beginning of the stroke. “Here, you are at full compression forward and taking the weight of the stroke,” says Teti. If you were in an actual rowing boat, you could visualize the blade as entering the water and “catching” the weight of its resistance.

The “drive” describes the basic sequence of the rowing stroke, which is legs first, then back, and finally arms. A few common mistakes to avoid are pulling with your arms first or opening up with your shoulders before you’ve driven the legs down. “I always liken the movement to a power clean and stress the importance of holding a strong body angle while pushing the legs down and then accelerating through with the body and then arms,” says Frandsen.

Quite literally, the “finish” of the stroke. After completing the stroke sequence, you should be “sitting with your legs flat, shoulders behind your hips, and the handle drawn horizontally to the body at the lower ribs,” according to Teti.

When you rest! From the “finish” position, the correct sequence is to move the hands away from the body first, then pivot from the hips to get back into that strong body position forward (your shoulders should be in front of your hips) and finally break the knees to roll up the slide to the starting “catch” position. “This movement should be blended together so as not to be too rigid, but the handle needs to get out past your knees before you start to roll up the slide so the handle doesn’t have to go up and over your knees,” says Teti. It can also be helpful to keep in mind that the handle should remain on one horizontal plane for the entire stroke and recovery, instead of bobbing up and down.

“I always try to reinforce the need to swing over from the hips and not simply by curving you back. This is crucial to avoid injury and to get you into a stronger position to be ready for the next stroke,” says Frandsen. Even as you start to get tired or feel fatigued, don’t allow yourself to slouch or to collapse into the “catch”–swing over early in the stroke and then think about your chest rising up to the catch.

A common misconception is that putting the fan setting up to 10 is somehow better or harder, but Frandsen completely disagrees. “In my 18 years of rowing, I never trained on the erg at anything over a fan setting of 3 or 4. Anything higher puts a lot of unnecessary load on the body at the beginning of the stroke and can lead to injuries,” says Frandsen. He recommends keeping the fan setting low and working on posture and quickness around the catch to pick up the resistance, instead of depending on the machine to give you that heavy load.

The “split” refers to how much time it would take you to cover 500 meters if you maintain that split. For example, if you are holding a 1:45 split, then it will take you 1 minute, 45 seconds to cover 500 meters. “It’s a great way to see if your training (and technique) is paying off with improved splits,” says Frandsen. You are able to program your workout in by going to “Select Workout,” then “New Workout,” and then inputting your work intervals based on time or distance, as well as your rest interval.

The most recent models of the erg, produced by Concept 2 (pictured above), have a screen with different options for what measurements or figures you want to see during your workout. Using the screen, you can monitor calories expended and watts produced, but “the vast majority of rowers will set the screen to track their 500-meter split or just simply ‘split,’” according to Teti. The stroke rate, which appears on the screen as “SPM,” refers to the number of strokes you are taking per minute. Typically the split and stroke rating have an inverse relationship, meaning that when you increase your stroke rating, the split should go down.

For the workouts, it’s not only critical to make sure that you maintain proper technique, but also that “you are properly warmed up for these workouts, especially the power sessions,” says Frandsen. He recommends starting slowly by adding one or two of these sessions, most of which are between 30 and 40 minutes in duration, per week before your strength training workout and then build from there.

*During the rest periods, you could take a few minutes to lightly paddle out on the rowing machine and then use the remaining time to stand up, stretch yours legs, and grab a quick drink.

Take 20 strokes as powerfully as you can while still maintaining correct technique, then take 10 strokes very light. That’s one rep. Rates for these power strokes should be between 20 and 24 strokes per minute. The goal should be to hold as low of a split as possible for each 20-stroke piece. Use the light strokes in between reps to regain length and correct your posture. Take a short break, no longer than 6 minutes, between the sets.

There isn’t a prescribed stroke rate for this workout, but it is important to make sure that you are keeping full length on the slide (legs). Be careful not to shorten up or scramble, as this will negatively affect technique and posture. The target is to hold the lowest average split possible, at a sprint pace that would be unsustainable over longer distances, for all four pieces. According to Frandsen, a competitive rower would “take advantage of every second of rest to ensure that each piece is of the highest intensity.”

These pieces are set at mid-range rates with lots of rest between.  Just like the 1,000-meter workout, you’ll want to take advantage of the long rest so that each piece is of the highest quality possible. The set rates step up throughout the piece, meaning that with each step up in rate, your 500-meter split should go down.

Now we start to decrease the intensity and increase the volume of these workouts, which will improve overall endurance and stamina. Complete this workout, 10 minutes of rowing at a hard steady-state pace (that’s one set), and take 3 minutes of rest between each set. The rates are set slightly lower so you should be able to focus on technique and solidify your posture at the catch, as well improving overall stroke length.

Complete this workout at a hard steady-state intensity throughout. Stick to the prescribed rates for each set and continue to work on improving length and posture.

This workout increases overall volume, while reining in the intensity. Row 6 minutes at a challenging pace, focusing on maximum application of strength and power. That’s one set. Use the short, 2-minute rest to stand up and stretch between each set, but don’t let your heart rate come down too much.

This a very standard rowing workout, designed to stretch volume at a steady, attainable pace. The focus should be on maintaining a solid 500-meter split (not too high, not too low) and working on technique and length.

Continue to stretch the volume at lower rates and with shorter rest.

Rugged and sporty, your new Roadster timepiece on the wrist will make you feel...