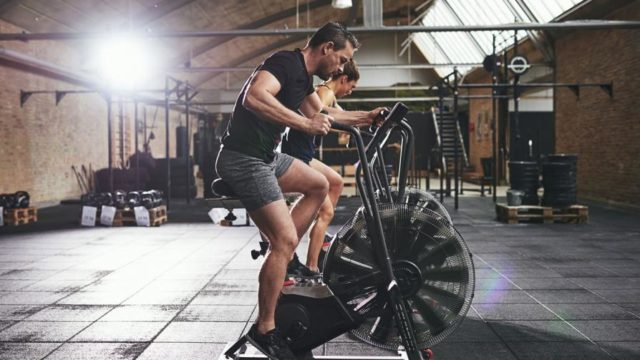 Q: WHAT’S THE DIFFERENCE BETWEEN CARDIO TRAINING AND WEIGHT TRAINING? IS ONE BETTER THAN THE OTHER?

A: If you’re after general conditioning, maintaining existing muscle mass, and keeping body fat to a minimum, you’re going to need to make a focus on balancing both cardio and weight training. The key is to make sure that one complements the other. Focus on three to four lifting days and two to three cardio days to promote the results you’re looking for in this respect.

Here’s the catch—only performing steady-state cardio can be counterproductive; too much steady-state cardio per week can result in muscle loss. Having said that, seek alternate methods that involve a bit more explosive movement to utilize your strongest muscle fibers available. A half-hour of sprints (or even better, hill sprints), intervals, or a solid round of basketball, tennis, or football can be just what the doctor ordered.

If you’re after strict cardiorespiratory benefits, put your emphasis toward steady-state cardio. Train for muscular endurance in the weight room, and up your reps to above 10 per set. Two to three days a week, aim for distance covered on the treadmill rowing machine, or outside over a longer period of time. Thirty to 45 minutes is a good guideline, as the muscular endurance and aerobic capacities will be challenged greatly. This can do well to offset the conditioning one can lose during certain phases of training (like a bulking phase, in which you’re eating more and making less effort to drop bodyweight or body fat).

Above all, however, always lift weights more often than doing cardio. The repeated impact of running, linear motion of biking, swimming, or rowing, and endless creations of the same movement pattern and ROM can create muscle imbalances over time that can lead to joint problems. A smart resistance training program can at least counter these effects—so be wise and make cardio supplement your weight training.

About the Trainer: Lee Boyce

Lee Boyce, C.P.T., is a strength coach based in Toronto, ON. A former Kinesiology major, Lee competed as a sprinter and long jumper at the National level. His work has been featured in many major magazines including Men’s Health, Musclemag, TNATION, and also on national television. For more on Lee, check him out at leeboycetraining.com, @coachleeboyce and Facebook.

Eat more nuts to strengthen yours

Drinking a few cups of coffee each day can help you live longer, according...