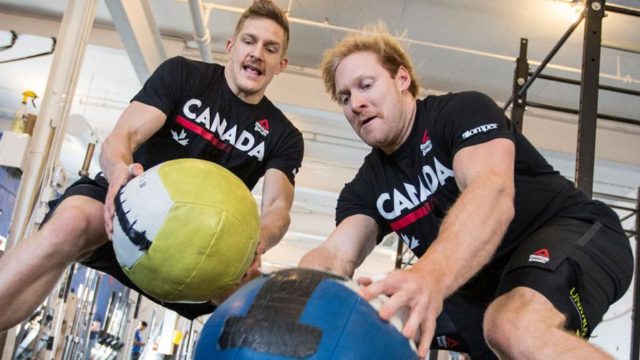 AT THIS YEAR’S CrossFit Games, Brent Fikowskidemonstrated that power and aerobic capacity don’t have to be mutually exclusive. The 26-year-old won the first event—a 1.5-mile run, 500-meter open-water swim, and another 1.5-mile run—with a blazing time of 28:45. The following day, he snatched 300lbs, a new personal record and only 5lbs shy of the event winner.

Though he started CrossFit only five years ago, the so-called “Professor” of CrossFit took fourth place in the 2016 Games and second in 2017 through a combination of careful analysis and exhaustive (and exhausting) training. Below, he shares how both have allowed him to maintain his endurance while building strength.

1. Lifting isn’t the only way to build strength

Unlike the other elite CrossFit athletes, who typically have backgrounds in sports like gymnastics, weightlifting, football, or rugby, Fikowski was a competitive swimmer and volleyball player. While the former has obvious cardiovascular benefits, Fikowski credits the latter for giving him the mechanics and body awareness necessary for CrossFit: “Wall-balls came really easy to me because it’s just like setting a volleyball, and even the power clean and push-jerks are not dissimilar to jumping and blocking.” If lifting weights is as appealing to you as taking a volleyball spike to the face, consider these alternatives.

Bottom line: Don’t think you have to exclusively live in the gym. Try strongman or boxing.

2. “As fast as possible” isn’t always the best plan of attack

There’s a seemingly brilliant hack for athletes who don’t enjoy cardio: Make every workout into a sprint. Going all-out, though, might mean you’re working less, not more. “Once you go past a certain point—we call it redlining in CrossFit—it’s really hard to come down from that point where your heart rate’s gone up so high,” says Fikowski.

To avoid redlining, he’s constantly checking to make sure his breathing rate isn’t too high or his grip strength isn’t fried, and then he pulls back when necessary. So, instead of spending half your workout hunched over, trying not to ralph, consider dialing back the fury a bit. Remember, high-intensity interval training is great—but it’s not the only option.

3. You don’t have to train for a marathon and a strongman competition in the same week—or even the same month

“Let’s say your conditioning and your strengths are both a lot lower than you want,” says Fikowski. “You have to give yourself time. If you do a bunch of conditioning and a bunch of strength every week, they’ll undoubtedly both improve after 52 weeks, because you’re working hard. However, if you spent six months really focusing on one and then six months on the other while still doing your best to maintain that other one, I think you would be a little further ahead.”

Because he has an aerobic base from swimming, Fikowski focuses primarily on building strength in the off-season. If that’s what you’re after as well, check out these exercises. If the thought of endlessly running around your block to build up endurance is unbearable, consider these unconventional cardio workouts.

Curious what one of Fikowski’s workouts looks like? Check out a sample below, a variation of which he does three or four times a week:

EMOM (every minute on the minute) 12 x 2 front squats at 80% of his one-rep max. Make sure to take your time: “It’s not a pause front squat, but it is very controlled.”

Build to a heavy five-rep set of banded deadlifts

A five-round circuit of:

The best foods to eat before a workout