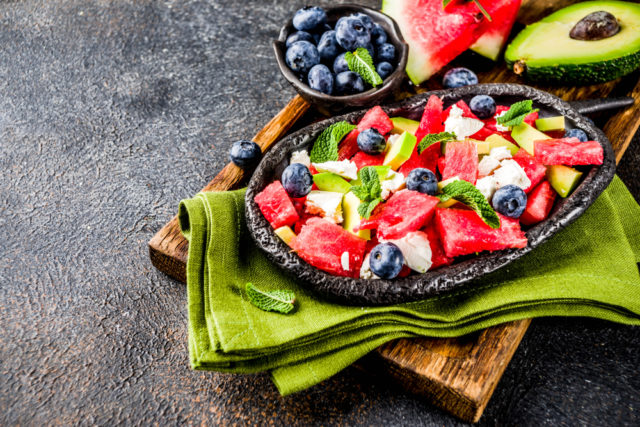 Suns out, guns out! Summer is officially here and that means summer superfoods. These summer foods will brighten up your plate and pack a punch of nutrition — delaying muscle fatigue, burning fat, and creating higher testosterone levels. Piling up your plate with the following foods will help you get that much closer to hitting your fitness goals.

When you’re going hard in the gym, inflammation is bound to happen post-workout. Tart cherries can expedite the recovery process due to their powerful antioxidant compounds. Intense workouts bring oxidative damage to the muscles, however antioxidants can counteract this. The Journal of The International Society of Sports Nutritionpublished a study where a group of runners ingested tart cherry juice twice daily for seven days prior to running. It was concluded that drinking the juice before an intense workout can decrease muscle soreness and inflammation.

Next time you’re in the produce aisle, look for green tomatoes. And yes, they’re still edible when they’re not fully ripened. Green tomatoes contain higher levels of the compound, tomatidine—a by-product of when the stomach digests the tomatoes. The compound works by preventing muscle atrophy and playing a role in muscle protein synthesis.

Fun fact: watermelon is a fruit and a vegetable that can relieve muscle soreness. A Spanish study in the Journal of Agricultural and Food Chemistry discovered that the juice from watermelon could soothe your sore muscles post-workout. The reason: it contains the amino acid, l-citrulline. Citrulline has also been tied to acting as a vasodilator, which means more muscle pumps.

This muscle-enhancing summer food list wouldn’t be complete without blueberries. They’re an antioxidant powerhouse — decreasing muscle fatigue. Throw a cup of blueberries into your post-workout shake, and you’ll be set.

Since it has a low fructose content, cantaloupe is one of the few fruits that is a fast-digesting carb. After a night of rest where your body has reset its metabolic clock, pair this melon with your protein-packed breakfast to help refuel glycogen stores.

Whether it’s zucchini or yellow squash, both fall into the summer squash family and are vitamin and mineral rich — specifically in magnesium. Magnesium plays a vital role in muscle contraction, supporting the function of actin and myosin. When your muscles contract, actin and myosin shorten — decreasing the length of your muscle fibers, eventually going back to normal. Having an abundance of magnesium in your system can prevent those unwanted muscle cramps. Summer squash is also rich in vitamin B9 (folate), which aids in the breakdown of macronutrients.

Bell peppers are the ultimate summer superfood because they’re packed with phytochemicals, vitamins, capsaicin, and enzymes — all working synergistically to pack on the health benefits. Load up a salad or simply snack on a few pepper slices with hummus.

Yes, Swiss chard is a dark, leafy green vegetable, but it’s important to pay attention to the bright colors in the stem and veins. Betacyanin and betaxanthin are powerful phytonutrients that give the stem its reddish purple and yellow color— helping keep everything in sync in the body. It’s also rich in magnesium. So if you’re tired of kale and spinach, give Swiss chard a try.

This summer favorite fruit is in season from July to September. Peaches are rich in vitamin B6, niacin, folate, and vitamin C. The B vitamins will help break down protein and carbs while vitamin C works to block cortisone levels — ultimately allowing for higher t-levels.

Add some heat to your plate with jalapeño peppers. Studies have shown that the capsaicin in the peppers can rev up the metabolism — helping you get that lean summer physique.

5 MISCONCEPTIONS MEN HAVE ABOUT PRACTICING YOGA

7 BODYBUILDING TIPS FOR GUYS OVER 30

IS A PROTEIN SHAKE ENOUGH AFTER A HEAVY LIFTING SESSION?