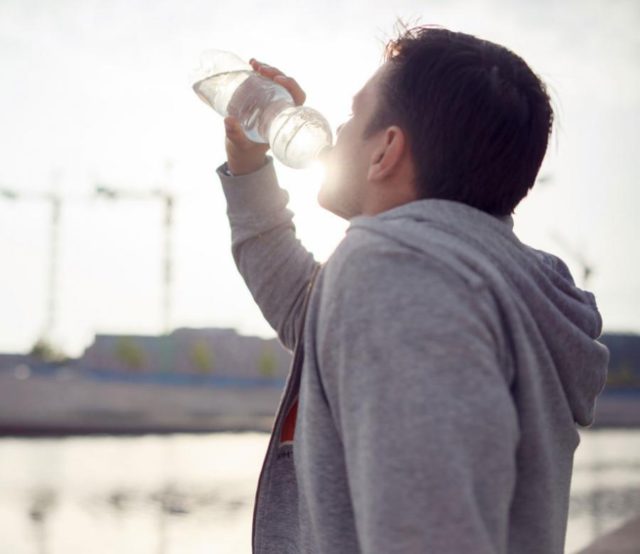 THERE ARE PLENTY of reasons to stay well-hydrated. For one thing, inch even slightly close to dehydration and your mood and energy levels will dip, making it hard to focus on, well, pretty much anything. To ward off the side effects of a dry spell, the trick is to stay at optimum levels.

“The color of your urine is often considered a reliable indicator of your state of hydration,” explains Dr. Robert Glatter, an emergency services physician at Lenox Hill Hospital in New York City. “A deeper yellow color, as opposed to a lighter or clear color, can indicate dehydration. When your urine is darker in color, it generally indicates that you need to drink more fluids.” But, sometimes, the thought of chugging one more glass of water is unbearable. When you need a break from the H2O, try these other surprising ways to quench your thirst. Here’s a hint: Get ready to fire up that grill.

Not only is everyone’s favorite summer fruit made up of 92% water, it’s also a leading source of lycopene, an antioxidant that the Mayo Institute says may reduce a guy’s risk of prostate cancer. Other health benefits include vitamins C, A, and B6. For an extra refreshing post-workout boost, cut it up into convenient cubes or scoop out balls using a melon ball scooper (trim off the rind to save space) and then sock it away in your freezer. You can either eat it frozen (it’ll taste like a sweet slushie) or thaw it out slowly in the fridge overnight.

Lettuce is comprised of a whopping 95% water content, making it the ideal green for hydrating, with romaine taking the lead as the most hydrating. To reap the optimal benefits, stick to the leafy green outer leaves where there’s a higher water count. A study that appeared in the Journal of Food Science found that heads of butter lettuce stored post-harvest contained the most water content in the outer section of the leaves, but that the water faded more quickly on the outer leaves than the internal, more sturdy leaves. So it’s best to eat the outer leaves within a day or two of purchasing when the water content is at its highest.

Here’s a surprising source of hydration: a hamburger. It turns out ground beef (85% lean) is comprised of 64% water when raw, and boasts a full 60% after it’s cooked. More hydrating still is the ‘eye of round’ roast cut of beef, which contains 73% water when raw, and 65% when cooked. Generally, as a rule of thumb, the leaner the beef the higher the water content.

You know how when you leave thawed chicken in the refrigerator, water pools around the plate? That’s because white chicken meat contains a whopping 69% watercount before cooking, and retains 66% after being cooked. “In a home refrigerator set at 40° or below, even more liquid will seep out of the product,” advises the U.S.D.A. Since the longer a product sits in the refrigerator, the more liquid will be released from the muscle cells, you should aim to cook it right after purchasing it to get the maximum hydration benefit.

A recent study that appeared in Medicine & Science in Sports & Exercise gave coconut water a big thumbs up for replenishing body fluids just as well as sports drinks—and even better than water. Coconut water, not to be confused with its high-calorie cousin coconut milk, is water that’s tapped from young, green coconuts. It contains potassium and is sometimes fortified with added sodium, which helps active people retain water when they perspire. “Compared to typical sports drinks, coconut water has fewer calories and less sodium, but higher amounts of potassium,” says Glatter. “As long as you enjoy the taste, coconut water may be better at keeping you hydrated for light recreational exercise than a sports drink or water, according to recent studies.” It’s generally found without added sugars, but does contain about 60 calories per 11-oz serving.

Dry oats by themselves do not a hydrating food make, but add water or milk for cooking and the thirst-quenching alchemy isn’t more than a few minutes off. Dry oats are incredibly absorbent, and the soluble fiber is known to keep blood sugar levels even, and help to reduce bad cholesterol. A perfect choice for hydration-helping camp breakfasts when you’re out on the hiking trail.

Rice, like oatmeal, starts out dry and inedible only to fluff up with water during the cooking process—offering a hydrating side to any meal. Your typical rice recipe is one part rice to two parts water, and a pinch of salt. One cup of cooked white rice weighs approximately 177g, and of those, a whopping 133g are water. Even further, the added salt will help your body retain the water long after the takeout is gone.

Avocados are already a nutrient-packed superfood, but who knew they contained between 60-70% water content? Naturally high in vitamins E, B, folate, and fiber, they’re a great way to augment traditional water intake. Garnish your hamburger with it (see #3), and you’re another step closer to meeting your daily H20 needs.

Tomato juice has the right balance of sodium and water content to keep people hydrated, and, strangely, a study conducted by researchers in Germany found that people perceive it to taste much better on planes, which is why you see it flying out of the aisles at the rate of more than 449,000 gallons per year on Lufthansa alone. Bonus nutrients: All that lycopene is great for your prostate, guys. So reach for the can when you feel that thirst kick in.

One cup of yogurt contains an impressive 85% water content, in addition to the other nutritional benefits like good bacteria for your gut and calcium for your bones. Swiss-style yogurt wins in the hydration arena over strained Greek yogurts, but has about half the protein. Opt for a Swiss yogurt post-workout to replenish your fluid intake and boost your energy.