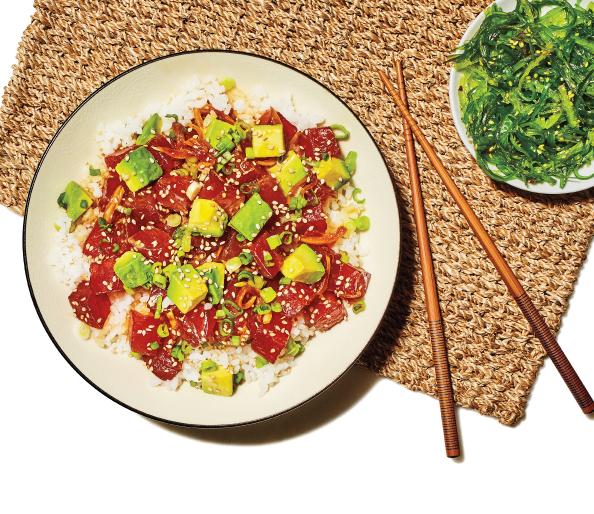 When adding raw fish to your kitchen repertoire, it’s critical to know how to find the freshest, highest-quality catch possible. Robby Cook, executive sushi chef at Morimoto in NYC and co-author of The Complete Guide to Sushi & Sashimi, tells you how.

Make Friends with a Fishmonger
“Ask where the fish came from, when it came in, and if it’s in season now,” says Cook. “That way you can determine how far the fish traveled and whether it was farm-raised or caught in season.”
Look Locally
Search out nearby Japanese or Asian markets. “They often have specific fish for sushi or sashimi and smaller blocks of fish so you don’t have to buy whole fillets,” says Cook.
See, Feel, and Smell for Yourself

Tuna should be a deep red, like steak; salmon a robust coral. Avoid fish that looks slimy, dry, or shiny. “Some whitefish and tuna develop an iridescence as they age,” says Cook. “Sushi chefs have a word for it when it’s old or bad quality—rainbow-y.” When you press down on it, it should be firm and push back. Finally, take a whiff. If it smells fishy, don’t buy it. You want a light ocean scent.

Know Which Fish is Good Raw

Unfortunately they don’t come with labels, and “sushi quality” doesn’t really mean anything, says Cook. “If it’s fresh you can eat it raw—beef, fish, whatever.” Go for the specific fish that are geared toward sushi and sashimi, like tuna, salmon, yellowtail, striped bass, and snapper. “If you’re able to source directly from the docks or fishermen, there’s nothing better,” he says.