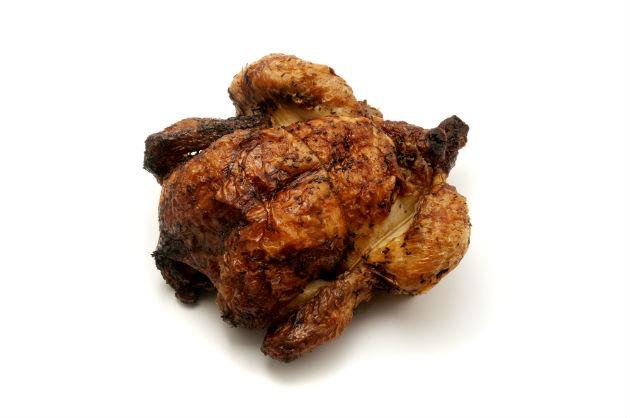 WHAT CAN HIDE your hard-won, chiseled abs behind a buffer of bloat; give you some busted-looking bags beneath your eyes; and cause your fingers to swell up like balloons?

The answer is sodium, and—believe it or not—the average American consumes more than double the American Heart Association’s daily recommendation of 1,500mg. Even scarier than those vanity-challenging side effects, though, is the fact that all that excess salt will also up your blood pressure, putting an added burden on your poor old heart. In fact, a new study presented at the AHA’s annual meeting last week found that excessive salt intake contributed to a whopping 2.3 million heart-related deaths worldwide in 2010 alone—and 40% of those were premature.

Yes, men of America, it’s time to get serious about wiping sodium from your diet. But why is that so hard? Turns out it’s not just salty chips and greasy fries that are problematic—it’s a whole host of foods you likely eat every day that seem, well, somewhat nutritious. “Things labeled healthy may be in one regard, such as high in protein or low in sugar,” says Dr. Martha Gulati, M.D., director of preventive cardiology at The Ohio State University Wexner Medical Center. “But those same foods may still be excessively high in sodium.”

Check out these 9 salt shockers, which will surely get you checking labels at the grocery store.

Once a wholesome staple of America’s dinner table, a recent CDC report ranked bread (and rolls) as the primo salt saboteur. The same holds true with the American Heart Association’s recently released “Salty Six,” in which bread (and rolls) also top the salt-disrupter list. Why? While not high in sodium per serving, bread plays a star role in many diets—and the sodium accumulates quickly during the day, says Rachel Johnson, Ph.D., R.D., American Heart Association spokesperson and University of Vermont nutrition professor.

Ready-to-pour cereals, while convenient, can be serious salt culprits, says San Francisco-based nutritionist Corinne Dobbas, M.S., R.D. Why? It’s simple: We often have a couple of servings in one sitting, which bumps up our sodium intake. That’s why Dobbas recommends checking the nutrition facts panel when selecting cereals, choosing one that contains less than 35mg of sodium per serving whenever possible. Kashi Autumn Wheat, Quaker Oats, and Kind Granola all fit the bill.

One tablespoon = 167mg of sodium

One tablespoon of ketchup doesn’t seem like the worst offender. But think about how much you usually use—probably not just a spoonful—and then consider what it’s poured on (your once-in-a-while French fry splurge, which is already doused in salt). Yeah, so that is how it adds up. If you can’t dip liberally, have fries with very-low-in-sodium vinegar (one tablespoon has less than 1mg) instead, and swap out table salt for health-protective herbs like rosemary, oregano, paprika, pepper, or curry power.

These meals will satisfy you in a pinch, that’s for sure, but don’t rely too heavily on frozen dinners—even when the label reads healthy and light, the “light” typically refers to calories, not sodium. Instead, load up on fresh or frozen produce, pine nuts, seeds, and olive oil, then throw together a quick homemade stir-fry with a teaspoon of low-sodium soy sauce.

Sure, you want to get your lean protein in. We get it. Just be careful what type you buy and what you pair it with. Opt for low-sodium deli meats, suggests Dobbas, or buy your own lean proteins, such as skinless chicken breasts or extra lean ground turkey—and get cooking. Pro tip: You can also have half a sandwich and pair it with a side salad made from a base of potassium-rich spinach or kale, suggests Gulati. Potassium has a blood pressure-lowering effect, which can somewhat counteract sodium’s effect on the body.

What could possibly sound healthier than vegetable juice? It’s got the right idea, but too often sodium is added to commercial varieties. Be sure to check labels and take into consideration how many servings you plan to have throughout the day. Another option is to stock up on produce and buy a starter juicer, which you can pick up for as little as $60. That way you can whip up your own pure-vegetable cocktails

We likely all know by now that canned foods typically tend to be very high in salt, with anywhere from 400-840mg per serving, according to the CDC. But the good news is that now you can find low-sodium soups in many grocery stores, and there’s also a simple way to reduce the amount of sodium that you consume when eating beans or vegetables from a can—simply rinse them under water before cooking.

One serving rotisserie chicken = up to 940mg

Is rotisserie chicken your go-to protein-packed, quick-dinner pick-up at the deli counter? Beware, says Johnson, as these birds can pack mega amounts of sodium. The CDC even listed fresh and processed poultry among its top 10 worst salt offenders because much of raw chicken is injected with a sodium solution. “It’s done to make chicken look plump and healthy on the shelf,” says Gulati. So here’s a tip: Look at the ingredient list on the label. If it lists sodium chloride as the second item, put that bird back, she says. You can also inquire at the deli counter which birds have been injected. (They should know, so don’t be afraid to ask.)

7 SIGNS THAT YOU’RE EATING TOO MUCH PROTEIN

3 Steps To Transform Your Workout To Hugh Jackman’s Routine For His Wolverine Role.