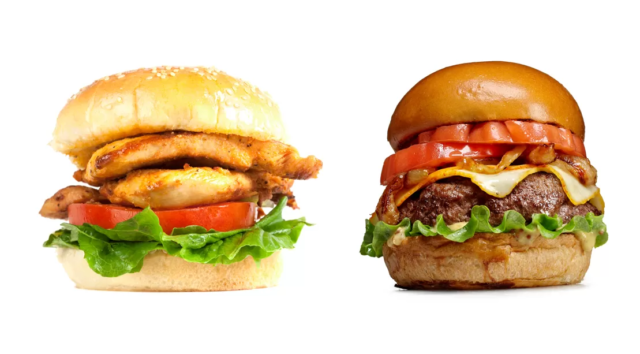 In this great world of ours, there are two kinds of people: those who eat burgersOpens a New Window. and those who prefer chicken sandwiches. Ignoring that blatant generalization for a moment, let’s break down these two workhorses of bar menus and backyard barbecues everywhere to see which one you should be reaching for when you’re hungryOpens a New Window..

For the most part, a grilled chicken sandwichOpens a New Window. is going to beat a burger in terms of calories and fat—but if you make some smart choices, it’s not by as much as you might think. So if you want a burger go ahead-just plan for it. Food should be enjoyed,” says Susan Kleiner, Ph.D., R.D., a nutritionist and the author of Power Eating. “Eat chicken instead of beef at another meal that week.”
Regardless of which one’s gracing your plate, there are several ways to steer things in a healthy direction. Kleiner recommends skipping the secret sauce, mayo, and sugar-laden ketchup and instead topping your burgers and chicken sandwiches with mustard and pickles.
When grilling burgers at home, opt for 90% lean ground beef, and make your patties four ounces or less. That’ll keep total fat and calories in check. For chicken, stay away from oils and added sugar. Instead, try a marinade of pineapple juice, garlic, ginger, tamari, and basil, finished off with toasted sesame oil as you remove the meat from the grillOpens a New Window..

Of course, you can save calories and reduce carbs by skipping the bun entirely—butter lettuce works nicely. But Kleiner has a better idea: Toast a whole-grain bun, then cut out the middle of it and discard. “You don’t need that big bun taking away all the flavor,” she says. “If you toast it, it’s sturdy enough and adds texture.”

WHAT ARE GMOS, AND ARE THEY SAFE?

How to train to failure for maximum muscle growth

No matter the pace or mileage, just get out there and run to live...