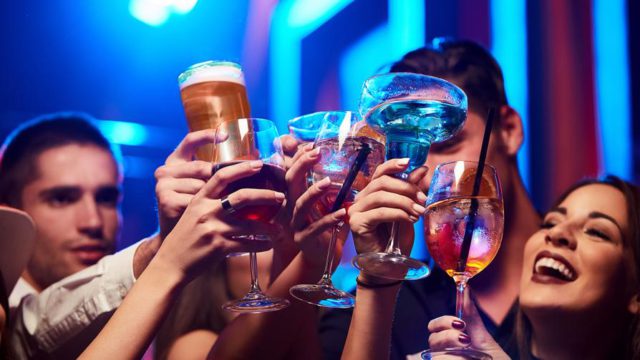 RESEARCH FROM the University of Alabama at Birmingham is putting figures behind the alarming college pastime: binge drinking. Researchers estimate 1,825 college students ages 18-24 die each year from alcohol-related injuries like car accidents, about 20% of college students meet the criteria for an alcohol use disorder, and one in four college students report negative academic consequences from drinking including missing class, flunking exams or papers, and receiving lower grades overall. Sobering, huh?

But binge drinking isn’t exclusive to young adults. You could be part of an exploding number of Americans entering the drinking danger zone, according to a CDC report that suggests over 38 million adults binge drink an average of four times a month. The report also discovered those who make more than $75,000 are more apt to binge drink.

So what exactly qualifies as binge drinking? Well, for men, it means having five or more drinks in two hours time.

“People often don’t recognize binge drinking as problem because it’s not a daily thing,” says Gregory Smith, M.D., a prescription addiction specialist at the Comprehensive Pain Relief Group in L.A. “They think, ‘I’m able to function at work and at home, and I don’t need to have a drink every day so I’m fine,’ but then they finish a bottle or two of wine over the weekend.”

Binge drinking is major cause for concern. Overindulging in alcohol is actually the culprit behind more than 80,000 deaths in this country, and is the third leading cause of preventable deaths. Check out these surprising signs you might be drinking too much—and how you can minimize your risk.

1. You become a big risk taker

If you’ve ever witnessed your normally reserved co-worker strip off his shirt or tell your boss where to go after one too many cocktails at the company holiday party, you’re well aware of how drinking can lower inhibitions. Getting drunk can cause you to act out of character in a way that’s much worse than having an embarrassing episode like sliding behind the wheel or having unprotected sex.

“You could be a person who has done everything right, but drinking too much on just one occasion can change your life for the worse,” Smith says. “The biggest risk factor when it comes to drinking is making bad decisions, because it increases your odds of contracting an STD, getting a DUI, or ending up in a fight or other violent situation.” Moreover, getting drunk makes you more prone to serious accidents of all kinds. Alcohol is to blame for about 60% of fatal burn injuries and drownings, and 40% of fatal falls and car accidents, according to the National Institute on Alcohol Abuse and Alcoholism. It’s also a factor in half of all sexual assaults.

“If you don’t drink daily but are drinking regularly, such as every Friday night, that’s a red flag,” Smith says. While some Harvard research shows having about seven alcoholic drinks a week lowers your risk of diabetes and cardiovascular disease, abstaining all week only to guzzle seven pints on a Friday night negates any of alcohol’s potential health benefits.

Moreover, binge drinking raises blood pressure, boosts your risk of cancer, and interferes with certain medications. You could also suffer esophageal bleeding if you have to throw up repeatedly.

3. You can’t stick to your own limits

Have you ever told yourself you were only going to have a drink or two at happy hour, and before you knew it you’d downed six beers and had a serious buzz? One of the clues that you may be a binge drinker is if you seem surprised that drinking somehow crept up on you. “If you have trouble meeting the limits you put on yourself, it signals a problem,” says Deidre Roach, M.D., of the NIAAA.

Like diabetes, heart disease, and other health problems, drinking can get out of control gradually. That’s why it’s smart to re-evaluate your drinking habits. Start writing down how much you drink and when, to reign yourself in if you’re starting to get a little out of control, and put reminders of the limit you want to stick to—such as having only two beers at happy hour—in your wallet, on your bathroom mirror, or some other place where you can look at it a couple of times a day.

Alcohol affects everyone differently because its effects depend on things like your genes (you’re four times more likely to have a drinking problem if one of your parents was an alcoholic), what medications you’re taking, and whether you ate a big meal (food slows the absorption of alcohol in your bloodstream). Still, researchers speculate that heavy drinking interferes with memory by disrupting a key brain messenger linked to recall called glutamate. If you’ve ever “forgotten” parts of the night until your drinking buddies reminded you, or have woken up in a woman’s bed, foggy about the details as to how you got there, you’ve definitely had one too many.

5. You become a slacker

“Drinking is a problem when you notice that you’ve started to neglect things that are important to you for the sake of alcohol,” says Keith Humphreys, Ph.D., of the Center for Health Care Evaluation in Menlo Park, CA. Maybe you’re normally a dedicated worker, but you’re too hungover from happy hour to prepare for your morning meeting. Or you repeatedly ignore your fitness goals and skip your after-work weight-lifting session in favor of happy hour.

6. Your family and friends are worried about you

“If you’re afraid to ask people if you drink too much, that’s probably a sign that you’re overdoing it,” Humphreys says. You may not be aware of exactly how much you’ve been drinking until it starts creating conflict with your relationships at home or at work. If your family, friends, or co-workers have hinted (or flat-out vocalized) that they’re worried about how much you imbibe, it’s time to cut back.

If you want to minimize your risk, read on.

According to research published in Lancet, alcohol is rated as the single most harmful of all abused substances, topping heroin, cocaine, and methamphetamines.

Lead researcher from the University of Alabama at Birmingham study Peter Hendricks recommends the following to reduce the harm of excessive alcohol use:

Can fruit make you fat?

3 TIPS FOR YOUR POST-WORKOUT SNACK