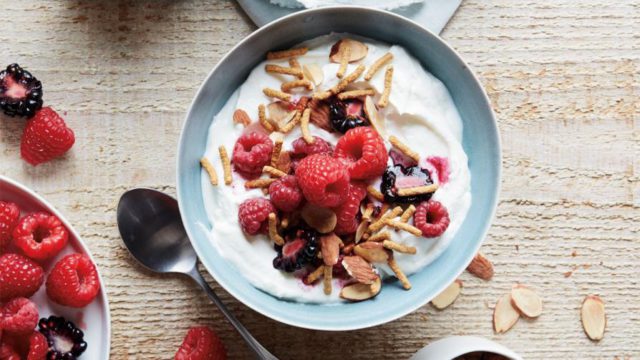 PROBIOTICS, THE MILLIONS of beneficial bacteria you consume when eating foods like yogurt, continue their march to the forefront of microbiological science with a new study from McMaster University in Canada. The helpful bugs in past studies have been implicated in influencing myriad bodily processes from improving intestinal health and boosting immune health, to cutting the risk of cancer and making our hearts function better.

Scientists already know that there is a gut/brain connection, and this new research solidified that link when it was discovered that probiotics may lesson symptoms of depression. The study followed 44 men and women with irritable bowel syndrome and mild to moderate anxiety or depression for 10 weeks, as they took either a daily dose of the probiotic Bifidobacterium longum or a placebo. The researchers found that, at six weeks in, 64% of the people on the probiotic had lessened depression scores compared to 32% for those on placebo.

A scan of the brain also showed that those eating the beneficial bugs had significant changes in the regions of the brain that have been associated with mood control. “This study shows that consumption of a specific probiotic can improve both gut symptoms and psychological issues in IBS,” said study senior author Premysl Bercik, M.D., an associate professor of medicine at McMaster. “This opens new avenues not only for the treatment of patients with functional bowel disorders, but also for patients with primary psychiatric diseases.”