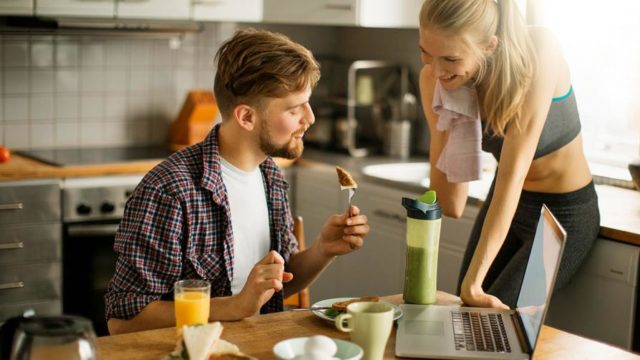 FLYING ACROSS TIME zones (usually eastward, or “against the clock”) can mess up your internal biological clock system. There’s nothing like a case of jet lag to put busy fliers down with cases of fatigue, insomnia, and irritability.

Now we can add another one to the list. Meal timing can help reset the body’s internal clocks, according to a new study published in the journal Cell Reports.

Researchers started with the assumption that the body’s internal clock system is interconnected with metabolism. They set up 10 young men in a lab for 13 days, and fed them three identical meals once every five hours, starting about 30 minutes after the guys woke up. After about seven days, they then switched the guys to a later meal schedule, albeit still with meals set five hours apart.

The researchers found that the schedule change didn’t affect the guys’ appetite, sleep habits, or the brain’s “master clock” function—but it did considerably change blood-sugar levels. “We anticipated seeing some delays in rhythms after the late meals, but the size of the change in blood sugar rhythms was surprising,” said Jonathan Johnston, Ph.D., of the University of Surrey. “It was also surprising that other metabolic rhythms, including blood insulin and triglyceride, did not change.”

The study showed that a five-hour delay in meal times triggered a five-hour delay in the internal blood sugar rhythms. Researchers think the change is driven by the body’s peripheral metabolic clocks, not the “main clock” in the brain. A “clock function” gene also slowed down in fat tissue by about an hour, adding more evidence that meal times can affect our molecular clocks.

Future research could help scientists figure out how to strategically use meal times to help people with circadian disorders or keep frequent fliers from suffering the effects of jet lag.

MMA How MMA workouts can boost your brain power