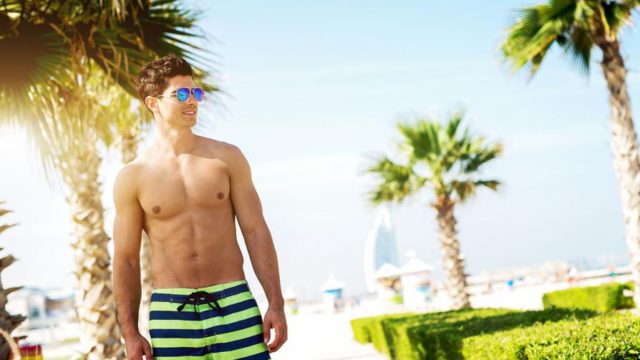 THE ONLY WAY you’ll ever lose fat and see your abs is if you eat fewer calories than you’re eating now. Nothing else—not lifting weights, not cardio, not supplements—can offset failing to adhere to this simple rule. Period. So if you can put your pizza and beer day on hold for the next six weeks, read on, and we’ll show you how to get a six-pack before summer is over.

It comes down to the calories

To lose fat, you have to burn more calories than you take in—but that doesn’t mean you can burn them with exercise. As Eric Ravussin, Ph.D., a weight-loss expert and professor at the Pennington Biomedical Research Center in Baton Rouge, LA, famously told The New York Times, “Exercise by itself is pretty useless for weight loss.” He ultimately made the point not only that people consume more calories than they can burn, but also that the extra strain of exercise stimulates appetite, making it even easier to replace the calories they’ve worked off.

According to Mayo Clinic research, a 73kg person performing high-impact aerobic exercise will burn only 533 calories in one hour. (Note that most people aren’t capable of sustaining an intense pace anywhere near that long.) Now consider that a healthy dinner of just four ounces of skinless chicken breast and one cup of rice contains 385 calories. That’s right: Eat one light meal and you’re a stone’s throw from breaking even with the calories you burned in that day’s workout—assuming the workout was long and extremely vigorous in the first place.

So if you can’t create a caloric deficit with exercise (at least not without a ton of it, marathon runners not withstanding), you must do it with your diet. Multiply your current body weight by 12—that’s how many calories you should consume per day to start with. If you’re very overweight, base your diet on the body weight you’re aiming for. So if you’re 100kgs but remember looking and feeling your best when you were 190, start taking in 2,300 calories a day (190 x 12, rounded up for simplicity).

It’s true that working out doesn’t burn enough calories to influence fat loss by itself, but it does support muscle mass, which allows for a healthier, better-looking, leaner body. To maximize results from your weight training, you need to eat the right combination of macronutrients. As protein is the main component of muscle tissue, it must be high—aim for one gram per pound of your body weight (or target weight, as explained above).

Fat, although calorically dense, plays a crucial role in supporting the production of hormones such as testosterone, so while it must be kept fairly low to help create the caloric deficit we’re aiming for, you can’t cut it out completely. Get 0.4 grams of fat per pound of your body weight—so a 90kg man would consume 80 grams daily. Most of your fat intake should come as a by-product of the protein-rich foods you eat (see “Eat Clean” for a sample list).

Now we’re left with carbs, and while there’s been much controversy over their role in a fat-loss diet in recent years, there shouldn’t be. “You need a moderate amount of carbs to support the fueling and recovery demands of high-intensity, anaerobic-based training,” says Nate Miyaki, C.S.S.N., an amateur bodybuilder, nutrition coach, and author in San Francisco. Extreme low-carb diets, especially those that substitute bacon, cheese, and other fatty foods in place of carbs, don’t work long-term and (surprise!) don’t support optimal health. “Training suffers when you’re on low carbs,” says Bryan Krahn, C.S.C.S., a New York City personal trainer. “If your carbs are really low, you can lower your metabolic rate. It’s a sledgehammer approach to weight loss and it’s unnecessary; you can just lower your calories.”

As with protein, aim to eat one gram of carbs for every pound you weigh.

Understand that these numbers are just a starting point. They should allow you to lose one or two pounds per week initially (more if you’re heavier), but if your weight loss stops dead for more than one week, cut your calories and readjust your numbers. Drop to 11 calories per pound first and, later, 10. Note that losing more than two pounds per week does not equate to greater fat loss. Losses that are extreme are more likely to come from water or, worse, muscle mass, so a steady but gradual diet is ideal. Reports of people who’ve lost weight any faster can’t be trusted.

Animal foods are the best sources of protein because they contain all the amino acids the body needs to perform all its functions, including building muscle. Chicken, fish, eggs, lean beef, and turkey should be your dietary staples. Protein powder supplements are also an acceptable source. A three-to-four-ounce portion of lean meat is about the size and thickness of your palm, and contains 20–25 grams of protein and five grams of fat or fewer (look up the nutrition facts for certain foods if you’re not sure).

Remember that the fats in your diet will come mainly by way of your protein foods, but you can have fattier fare such as avocados, nuts, nut butter, and cooking oils such as olive and coconut to make up the rest. Your carbohydrates should come mainly from white rice, potatoes, and sweet potatoes. Why white rice over brown? The brown stuff contains compounds that can block the absorption of nutrients. “White rice has had its hull removed,” says Miyaki, “leaving only the starch, which is all your body needs to replenish the glucose stores that fuel your training.” It’s true that brown rice packs more vitamins and minerals, but that’s what vegetables are for. Your intake of green veggies should be high—there’s no limit on how many you’re allowed.

“You can have one piece of whole fruit after your weight workouts,” says Miyaki. “Fruit is a fast-digesting carb source that can provide your body with immediate recovery fuel.” It’s a better choice than a carb powder, which Miyaki says can spike your insulin and cause rebound hypoglycemia—that crash you get after a sugary meal that can sap your energy for hours. An apple or banana works perfectly, and comes out to about 30 grams of carbs total.

Dairy, grains, and processed foods are not good diet choices. While they do provide useful nutrition, most people have an intolerance to them that causes digestive distress. If you feel fine eating some dairy or grains, go ahead and enjoy them sparingly, but you’ll get faster and better results sticking to the foods on our list.

The role of training

Working out doesn’t burn enough calories to unload serious fat, but it does make you more muscular, which increases your metabolism and will help you stay lean once you’ve dieted down to where you want to be. “Standard weight training works fine,” says Krahn. “Do a heavy upper and lower day, and then two light days later in the week.” Your heavy days can limit reps to 5–8, and lighter workouts can be done in the range of 8–15. “Or, you can do three full-body workouts per week.” Since abs are primarily the result of clean eating, exercises that isolate them are not absolutely necessary, but feel free to include one to three ab moves per session.

Cardio is not essential for fat loss. However, it is required for optimal heart health and conditioning, so perform some kind of cardiovascular exercise three to five times per week.

How to get the girl who’s out of your league