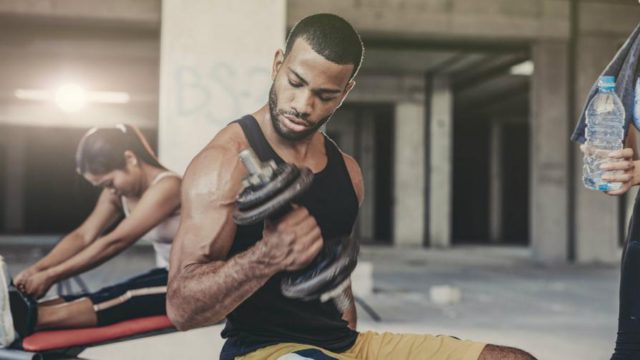 GUYS WHO HIT the gym and end up just messing around don’t make much progress—especially if they’re not really following much of a plan.

Of course, those guys who follow a consistent workout program and stick to it will make faster and bigger gains, but sports scientists are still researching how to build an optimal plan for overall fitness—and that challenge is probably best exemplified by the perennial debate over “training for strength” versus “training for endurance.” We’ve all heard the old gym rats say it: “You can’t train for big muscles and practice your endurance at the same time.”

And while that old weight-room chestnut may be popular, the question remains: If you were to try training for strength and endurance, what’s the best way to do it? Now, a recent review from Australia’s James Cook University has shed some light on the best way to combine resistance training with cardio.

The authors point out in the paper that resistance exercise wears the body down initially, and can produce significant fatigue. If you then try to do some cardio or endurance training on the same day (or even several days afterward, which is called concurrent training), your body may not be fully recovered and the combined fatigue could possibly impair your progress. They note that the typical 40- to 60-minute lifting routine causes physiological stress that can last for a few days. Going for a run, however, only requires an estimated 24 hours of recovery.

“We want to increase the awareness of resistance training-induced fatigue in the hope of encouraging coaches to think about aspects such as the order of the training, the recovery period, training intensity, etc.,” said study lead Kenji Doma, Ph.D., lecturer at the College of Healthcare Sciences at James Cook. “We’re trying to limit the carry-over effects of fatigue from resistance to endurance training sessions.”

So don’t totally jettison concurrent training, they say, but you should be aware that there can be a better way to organize the order of exercise. “There are great benefits to it,” says Doma, “but there can be some hidden dangers too. What we want to see is fatigue from resistance sessions minimized so there can be even more benefits gained.”

And gains is one thing everyone can agree on.

5 WAYS TO BEEF UP YOUR PROTEIN INTAKE