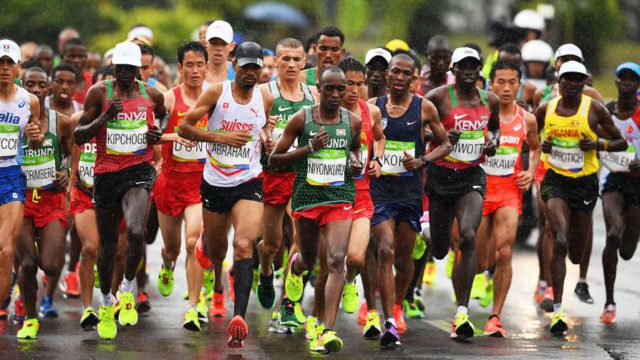 FOR MOST PEOPLE, running a marathon (or even a half-marathon) can seem like a daunting—if not impossible—task.

But for a few remarkably athletic distance runners out there, cranking out dozens of miles on a weekly basis and crossing the finish line (without collapsing or passing out) seems to come just a bit more naturally.

Sure, proper training and marathon preparation certainly play a key role in a person’s marathon-running success, but there’s also another reason why certain athletes are predisposed to crushing those 26.2 miles: genetics.

Apparently, athletes with certain genes can complete a marathon with significantly lower levels of muscle deterioration than people without that special hereditary makeup, according to a recent study published in the journal PLOS ONE.

In the study, researchers analyzed seven genes related to muscle function in 71 seasoned marathon runners, who underwent blood tests before and after a competition and measurements of their vertical jump. Each gene was given a numerical value (between 0 and 2) depending on whether or not it gave the runner a muscular advantage (0 indicated no advantage, while 2 indicated the greatest advantage).

What they found: Runners with a high rating—the maximum possible score was 14—had the best muscle genetics to complete a marathon, while those on the lower end had the opposite. Specifically, runners with a higher genetic rating had lower levels of creatine kinase and myoglobin in their blood, resulting in less damage to muscle fibers.

But even if you have a lower genetic score, you shouldn’t be discouraged from running a marathon—it just means that you’ll “have to do specific training to prepare your muscles for facing these demanding conditions,” said Juan Del Coso, a researcher and author on the study. And no matter what your genetic make up is, this essential marathon training plan for men is a great way to jump-start your distance running goals.

5 BENEFITS OF ADDING CASEIN PROTEIN TO YOUR SUPPLEMENT STACK