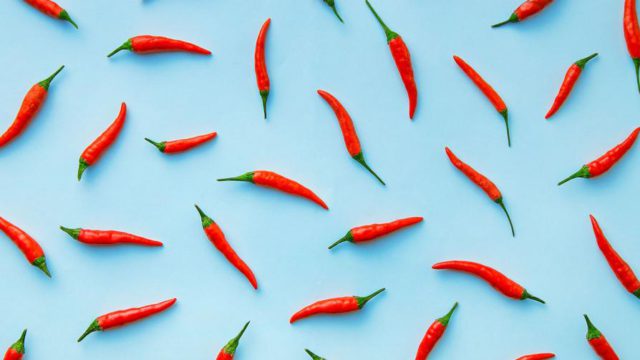 SCIENTISTS BELIEVE THAT our gastrointestinal tract is essentially a second brain. It’s deeply linked to the brain in your head by a large network of neurons, and they both pass a flood of chemicals and hormones back and forth constantly. The gut is filled with just as many complex nerves as the spinal cord, and can operate independently from our central nervous system.

Researchers from the University of Connecticut shed a little more light on the remarkableness of the gastrointestinal tract when their recent study discovered that the gut has receptors that react to hot chili pepper ingestion by creating a compound called anadamide. This chemical works to regulate the gut immune system and bring it into balance, and is also related to the cannabinoids found in marijuana. The brain similarly has anadamide receptors, and these are what get activated and make you feel high when marijuana is used.

“This allows you to imagine ways the immune system and the brain might talk to each other. They share a common language,” said study author Pramod Srivastava, M.D., Ph.D., professor of immunology and medicine at UConn School of Medicine. Anadamide is that link and the researchers also found that it, when created, works to make more anandamide and spurs another receptor to make macrophages, which are immune cells that tamp down inflammation.

Eating hot peppers and using marijuana could effectively help those with gastrointestinal inflammation like colitis, Crohn’s disease, and even diabetes. So, we suggest perhaps ordering up some jalapeño poppers next time you take a toke, and eschewing the pizza.