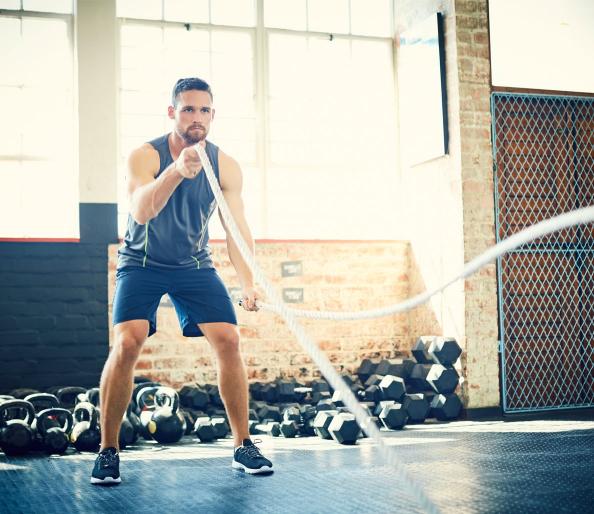 By now, you’ve probably heard about the keto diet. You’ve probably heard that it all but bans carbs and sugars, or that it’s been clinically shown to reduce epileptic seizures in kids, or even that it helps people condition their bodies to burn fat.

But as any bodybuilder knows, you don’t need to be on the keto diet to burn fat. Heck, you can do it with a focused meal and exercise plan.

So we’ve been wondering: When your body “burns fat” for energy, what’s really going on there? How exactly does the keto diet work? And why the hell is it called the “keto” diet, anyway?

Well strap some protective boxing headgear over those thinking caps, bros, because we’re about to roundhouse kick you in the brain with some KNOWLEDGE.

WHY DOES THE BODY GO INTO FAT-BURNING MODE?

For most people on Western or Mediterranean diets, the body gets its energy by burning sugar, usually derived from carbs. But when the body runs low on sugar—during a fast, say, or even during really strenuous exercise—it enters a kind of “starvation mode.”

When that happens, the body starts saving up its remaining reserves of sugar, reaches into its fat cells, and starts burning fat for energy.

“Ketosis can be helpful for people trying to lose weight,” says Dr. Phillip Madonia, M.D. “Ingesting carbs and sugar triggers the release of insulin, the storage hormone. The insulin causes the sugar we ingest to be stored as fat.”

HOW EXACTLY DOES THE BODY TURN FAT INTO ENERGY?

Most of your body’s cells can use regular old fatty acids for energy. Scientists think your body is especially good at using so-called medium-chain triglycerides (MCTs), which show up a lot in coconut oil—hence the rising popularity of coconut oil these days.

The only problem? Some parts of your body—most notably your brain—can’t use unrefined fatty acids for energy. And as you probably guessed, it’s really, really important to keep your brain fed.

“All the body needs for ketosis is fat cells and the liver (and its included hormones),” Madonia says.

To feed your brain, the body has to refine fatty acids into some more easily usable fuel. So the fatty acids get shipped to your liver, which begins the process of ketosis. That’s where the name “keto diet” comes from. People on the keto diet have effectively convinced their bodies to permanently switch gears to ketosis, instead of burning sugar as they normally would.

WHAT HAPPENS DURING KETOSIS?

Think of your liver as a factory. Its job is to break down fatty acids into molecular compounds called ketone bodies, which are your body’s favorite way of transforming fats into easily digestible packets of energy. Your brain can’t absorb fatty acids, but itcan absorb ketone bodies.

There are three main ketone bodies. One is acetone (a.k.a. the awful-smelling stuff your girlfriend uses to remove nail polish). The other two ketone bodies are nicknamed AcAcand 3HB, and they are the most important when it comes to fueling up your body.

Sometimes, you’ll hear people talk about ketones. Ketones are a type of organic chemical compounds, just like carbohydrates, fats, or proteins. Ketones all follow a basic structural pattern: two separate chemical groups joined by a double-bonded oxygen atom. The classic ketone is acetone, your girlfriend’s nail polish remover. Another ketone is tetracycline, a common antibiotic. AcAc is a ketone, but 3HB is not.

Once your body has produced those ketone bodies, it can shuttle them to the brain, which switches over from its preferred energy source of glucose and starts relying on ketone bodies instead.

HANG ON. ISN’T IT BAD TO FIND KETONE BODIES IN YOUR BLOOD?

It can be, especially for type-1 diabetics. When diabetics run low on insulin to use glucose, their bodies start burning fats (in the form of ketone bodies) for energy. If their ketone body count gets too high, their bloodstream turns acidic, leading to a dangerous condition called diabetic ketoacidosis, or DKA for short. Symptoms include extreme thirst, frequently needing to pee, high blood sugar levels, nausea, difficulty breathing, or even “acetone breath.”

“Ketosis created by not ingesting carbs is a different beast from diabetic ketoacidosis,” Madonia explains. “Ketoacidosis is usually caused by stress states (like an illness). The increased stress hormone levels trigger a complex metabolic pathway where peripheral fat cells are broken down into fatty acids, which are then transported to the liver where beta oxidation splits the fatty acids into ketones.”

Ketone bodies make blood more acidic in non-diabetics, too—it’s just that diabetics tend to create way more ketone bodies, to the point that they overwhelm the body’s ability to compensate.

SO HOW DOES THE KETONE DIET AFFECT MY GYM ROUTINE?

Good question! First, you need to know that your body has three basic ways of burning fuel, calledmetabolic pathways:
– phosphagen (maximum energy in the shortest amount of time; think powerlifting)
– glycolytic (for short bursts of energy, like a 100-meter sprint)
– aerobic (long-term exercise, like a 40-mile bike ride at a moderate pace; also the most efficient form of energy generation)

Here’s why that matters: Ketosis is strictly an aerobic form of generating energy, which means that your body needs oxygen to make it work. If you’re going for multiple-hour-long bike rides, then your body should have no problem getting enough oxygen to your muscles, and it can rely on ketosis to get the energy it needs.

“It’s still hard to know how the effect of using ketones as fuel,” Madonia says. “Studies have shown that ketones for fuel are superior to carbs in states of long-term, ‘low-energy’ states of exercise—the accepted time frame is longer than two hours. Glucose ingestion”—so, carbs—”must be used for what is considered ‘normal exercise’—even distance running. Weightlifting, basketball, swimming—those require carbs to fuel them.”

at storing sugar. Fat is also more energy-dense than carbs, with 9 calories for every gram of fat to 4 calories for a gram of carbs. So people who have trained their bodies to rely on fat for fuel—in other words, people on the keto diet—are relying on a plentiful, dense form of energy, compared to carbs, a less energy-dense fuel that they need to frequently replenish.

BUT WHAT IF YOU’RE HITTING THE IRON, SCHWARZENEGGER-STYLE?

Here’s where it gets really interesting. Remember how we talked about phosphagen and glycolysis? They’reanaerobic forms of energy generation. The body uses those methods when it needs to generate energy but can’t get enough oxygen to the muscles fast enough to sustain aerobic energy generation.

In those situations, ketosis is much less useful, because ketosis depends on oxygen to work. No oxygen, no ketosis—and that means weightlifting and high-intensity exercise are more difficult when you’ve conditioned your body to rely on ketosis for energy.

– The keto diet encourages your body generate energy through ketosis, which breaks down fats into ketone bodies your body can use for energy.

– In theory, the keto diet can be helpful for endurance athletes because it gives them a stable reserve of energy.

– In theory, the keto diet can be difficult for other types of athletes, because their bodies need sugar to fuel anaerobic metabolic burn.

– Diabetics should be alert for elevated levels of ketones and ketone bodies in their bloodstream.

– Always talk to your doctor before trying a major diet change, especiallyif you have pre-existing medical issues affected by diet.

– Remember, don’t confuse weight loss with fitness. “They are not the same,” Madonia says. “To simply make the number on the scale decrease, you need a negative calorie balance, or you can cause insulin-hormone deficient states as the ketone or the Atkins diet. Being fit requires physical activity, which requires fuel—namely carbs.”

BOOST YOUR TESTOSTERONE ON A VEGAN DIET