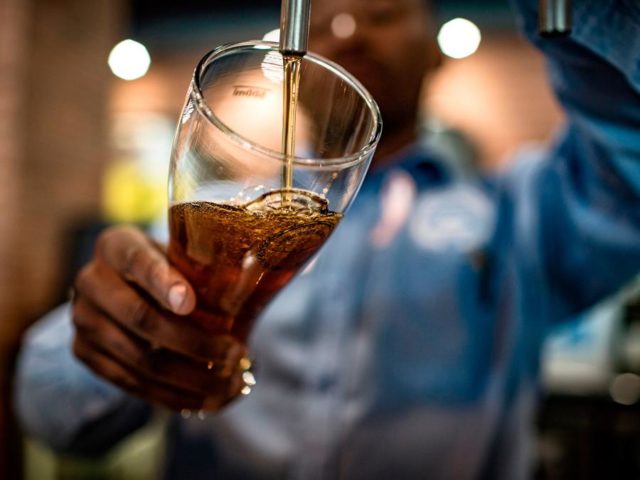 THERE’S REALLY NO reason to think canned beer is a downgrade from the bottle (and screw-off wine is sub-par to corked varieties). If it’s been stored, it’s basically the same stuff.

But there is one hard and fast rule to drinking beer (and wine): No matter how you bought it, you should enjoy it in a glass. (Especially the wine. Don’t be that guy slugging from the bottle.) A glass lets beer unfurl its unique aroma, which brewers work furiously to perfect.

The only challenge from there: how to perfectly pour beer into the glass. You’ve probably mastered the basics on how to pour a handsome pint: Tilt the glass at a 45° angle, slowly fill to the midpoint, bring the glass upright, then continue pouring ’til you reach the top.

But pouring the perfect pint goes beyond the ol’ 45°-angle rule. Your technique depends upon the kind of beer you’re pouring, the best beer temperature, and even your glassware of choice. Here’s how to pour the perfect pint, every time.

All excerpts reprinted with permission from Atlas of Beer: A Globetrotting Journey Through the World of Beer by Nancy Hoalst-Pullen and Mark W. Patterson, published by National Geographic in September 2017. Available wherever books are sold.

1. Get the temperature right

Not all beer is meant to be served cold. In fact, most shouldn’t be. Temperature is key to enjoying any given beer style, so follow these three general rules of thumb: First, a beer’s serving temperature should increase as its alcohol by volume—aka ABV—increases. Second, darker beer generally should be served at warmer temperatures. Third, beer that has little-to-no yeast flavor, like clean, crisp-tasting lagers, should be served cold. Beer should never be served in a frosted glass: The

2. Know that not all beer foams alike

Having a head (foam) on top of your beer isn’t always bad. In fact, it’s preferred for certain beer styles. Some styles have large heads because they’re unfiltered, like wheat ales—the result of residual yeast, hops, and proteins. Foam, which is around 20% beer mixed with gas, can get rid of carbon dioxide that imparts a bitter taste. It can also produce subtle changes in the texture of beer that can’t be achieved in the brewing process. If you plan to drink a cask-conditioned ale, or one from a barrel rather than a keg or bottle, expect very little head (if any) and a mouthfeel that’s a bit flat.

3. Get the right glassware for your brew

Proper glassware reveals a beer’s character and accentuates its color, aroma, and taste. While some bars use a pint glass regardless of the style they’re serving, this certainly isn’t the case everywhere. In Belgium, every brand of beer has its own glassware, designed to enhance the drinking experience. The glassware is so important that it’s sometimes created before the beer itself. While beer is served at varying temperatures (cold, chilled, cellar, room) to bring out its best characteristics, the glassware in which it’s served is what matters to Belgians. Pouring beer into a glass opens up its flavors and aromas, helps retain its head, and makes drinking it a more eventful experience. Belgians believe so fervently in the importance of glassware that cafés often use a brewery’s own distinctive glasses, which are made to highlight the color, aroma, and taste of each beer the brewery produces. Some Belgian breweries engineer their glassware even before they create the beer that goes into it. As a result, many Belgian cafés and pubs stock hundreds, if not thousands, of glasses. If bartenders do not have the proper glassware for a particular beer, they will often ask the customer if a different glass is acceptable, or if instead they want to choose another brew.

4. Note what’s going on with the bubbles

Don’t be put off if bubbles rise up in a center column in your beer; that’s just carbon dioxide escaping, which is completely normal. But gas bubbles that stick to the sides of your glass? Well, that’s a sign that the glass is dirty. A dirty glass can kill a beer’s head, which contributes to the beer’s flavor and texture.