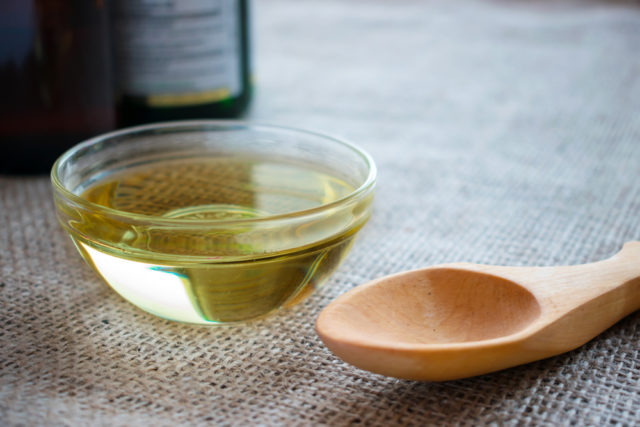 Any gym rat worth his protein powder has probably heard fellow lifters talking about MCTs while hoisting heavy weights or read about them while browsing muscle mags like this one. They purportedly can give you big bursts of energy, torch fat to lean you out, and even improve mental clarity and focus. But what’s the deal with MCTs—also known as medium-chain triglycerides—and how can they help you get a lean and shredded body?

As the name triglyceride suggests, they’re a type of fat, saturated fat to be exact, that is found in some foods and specifically in high amounts in coconut and palm oil. “The majority of dietary fats that you consume are long-chain fatty acids (LCFAs), which are more prevalent in the foods that you’d typically eat,” says Gabe Staub, R.D., C.S.S.D., C.S.C.S., nutrition consultant and strength coach at Fuel Factor Fitness & Nutrition. These LCFAs are found in olive oil, fish, nuts, and avocados.

The long-chain fats contain 14 or more carbon atoms attached to them, while the medium-chain fats have from 6 to 12 atoms. This lower number of carbon atoms simply means that they’re physically smaller that most fats, allowing them to be directly absorbed into the bloodstream after you eat them. “They can bypass a few steps in the digestive system and enter directly into your liver via the portal vein,” says Staub. “That’s the potential magic of MCTs because they can then be used immediately for energy metabolism. LCFAs have to travel to other tissues like muscles and adipose and that takes them much longer to be utilized for energy, and also results in LCFAs being stored as energy reserves, or fat.”

HOW CAN YOU USE THEM?

If you’re trying to cut down on calories and lower the amount of fat in your body composition, you can incorporate MCTs at meal time to tamp down your appetite. And if you’re on a low-carb diet, says Staub, adding in MCTs may actually allow you to eat more carbs because the ketones produced by the fat can be utilized as an energy source, even by your brain.

The best way to start experimenting with MCTs and finding out whether they will work for you and your goals is to start out by taking some of the oil, straight up. Staub suggests trying 1 to 3 teaspoons per day spread out during the day and taken with meals to see how you react. Common side effects include nausea, stomach pain, diarrhea, and vomiting, which is why it’s also recommended to not take them before a workout.

WHERE DO YOU GET THEM?

Foods that contain naturally high levels of MCTs are coconut oil (60% or more), palm kernel oil (50% or more), and dairy products (just over 10%), says Staub. But instead of just adding a few spoonfuls of coconut or palm oil into your smoothie or coffee, it’s probably easiest to buy some of the pure stuff from reputable health stores.  MCTs are also creeping into everyday foods and supplements like Bulletproof Coffee and Grass Fed Coffee, and you can get special sports gels and supplements.

But Staub recommends that MCT oil newbies stick to the pure oil products as they’re easy to consume and typically do not have a taste. Just be sure to look for trusted sources such as third party tested products from the NSF or Informed-Sport Certified brands.

7 do’s and don’ts for a better-working brain

HEALTH Everything you need to know about water around the world