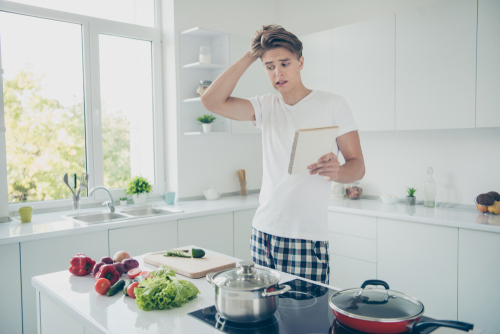 The first step to addressing your weight loss. goals is what many see as the most difficult obstacle: fixing your eating habits..

We’ve spent our entire lives developing a taste for certain types of foods, and often it’s the unhealthy kinds: processed carbs, fast food, sugary pastries, and, let’s not forget, deep-fried. But our eating habits. go deeper than that…deep within our psyche: maybe you’re a picky eater and avoid green food, maybe your parents idea of cooking was the drive-thru window of a fast food joint, or maybe you just don’t know any better.

But now that you’re older and wiser, it’s time to arm yourself with some knowledge of how to eat right and feel better. Forget trend diets that you only follow for a month, these tips will set you up for long-term success..

What foods should I eat?

The answer to this shouldn’t surprise you: healthy food! And food that’s as close to its natural state as possible.

You need to begin thinking of food in terms of the amount of macronutrients—protein, carbs, and fat— it provides, and try to keep track of the foods you get those nutrients from (more on this below).

As for fat, most of it will come as a by-product of your protein foods, but you can also derive fat from avocados, nuts, nut butters, seeds, and a small amount of oil such as coconut or olive.

How much should I eat?

Get ready to start keeping track of calories. and macronutrients. You don’t need to be meticulous, but you do need to be consistent.

If your goal is to gain muscle size and maximize strength, consume 14–18 calories per pound of your body weight. For fat loss, go with 10–12 calories per pound. Yes, these are ranges and not exact numbers—you’ll need to experiment a bit and find what works for you.

Start on the lower end of the spectrum for muscle gain and the higher end for fat loss, so that changes can be made gradually, and adjust if you aren’t gaining or losing weight after two weeks.

When bulking up or slimming down, your protein and fat intake should be very similar. Eat 1–1.5 grams of protein per pound of your body weight and 0.4 gram of fat per pound.

Carbohydrates have the greatest effect on body weight due to their impact on insulin, a hormone that alternately causes muscle or fat gain depending on the timing and composition of your meals. For this reason, the amount of carbs you eat will vary greatly depending on your goal.

To gain size, you should consume two grams of carbs per pound of your body weight. Be prepared to gain some fat along with the muscle, as more carbs mean higher insulin levels and more potential for fat storage. To lose fat, consume one gram of carbs per pound.

WHAT DOES IT ALL MEAN?

If you’re a 180-pound guy who wants to put on muscle, you might start your mass-gain diet by eating approximately 2,700 calories per day. This would consist of 180 grams of protein, 360 grams of carbs, and 70 grams of fat.

If the same guy wants to trim fat, he would eat 180 grams of carbs instead of 360 to start with.

Is there an easier way to estimate calories and grams?

Absolutely. First, just focus on the grams you need to consume—the calories will fall into place accordingly, provided you aren’t slathering your food in sauces, dressings, and other seasonings. (Learn to flavor your meals more simply; see recipes on muscleandfitness.com.)

“Four ounces of meat or fish is about 25 grams of protein,” says Nate Miyaki, C.S.S.N., a nutrition consultant in San Francisco who works with bodybuilders to prepare for contests.. “That’s the size of a deck of cards.” One cup, or eight ounces, of a starch food (potatoes, rice) is about the size of a baseball, or a clenched fist, and that’s equal to 50 grams of carbs.

“One piece of fruit is about 25 grams of carbs,” says Miyaki, “unless it’s a melon.” Non-starchy vegetables, including all greens, do not need to be counted.

As we mentioned before, most of your dietary fat will come via your protein foods—a four-ounce portion of meat or fish has as many as five grams of fat—but you can eat fat-rich foods sparingly. Two tablespoons of nut butter is about the length of your thumb and totals 15–20 grams of fat, and a cup of raw nuts offers roughly 70 grams. A tablespoon of any oil is 15 grams of fat.

You may be interested to know that foods that have a high fat content aren’t limited because fat is “unhealthy” or inherently fattening. Physique-conscious eaters need only be wary of them because of the calories they pack (nine per gram as opposed to carbs and protein, which offer only four).

Because fat is so caloric, it can make you overshoot your calorie range in no time, and crowd out the other nutrients in your diet. Nevertheless, if you have trouble gaining weight, one of your strategies might be to increase your fat intake, which will add considerable calories.

As far as saturated fat goes, it’s used by the body to create testosterone, so don’t be afraid to have a lean steak or burger on a regular basis.

What should I eat before a workout?

Let the timing of your workout determine this. If you’re training first thing in the morning, you’re welcome to have nothing but water beforehand. Black coffee is fine, too, and may actually increase the amount of fat you burn in the session.

Assuming you had dinner the night before, your body will still be flush with amino acids (components of protein) and stored carbs, so there’s no immediate need to fuel your training any further. In fact, eating carbs right before can limit the fat you burn during a session.

On the other hand, if you’re training in the afternoon or evening, you can have some protein and carbs an hour or more before the workout to power you through it; 25 grams protein and up to 50 grams carbs is fine.

What should I eat after a workout?

A 2000 study in the European Journal of Applied Physiology gave male subjects one of the following to consume after weight training: a 6% carb solution, six grams of amino acids, a combination of both, or a placebo. Those drinking the carb and amino acid shake experienced greater muscle gains than any of the other groups, which the researchers concluded was because the concoction did the most to reduce muscle protein breakdown after training.

The exact amount of protein and carbs you should eat is a subject of debate, but most nutritionists agree that consuming some is better than none.

We like a 2-to-1 ratio of carbs to protein—such as another 50 grams of carbs and 25 grams protein. A protein shake would be ideal at this time because it digests quickly, getting the nutrients to the muscles fast when they need them most to begin the recovery process.

However, whole food can work as well. If you’re short on money, Miyaki says one or two pieces of fruit provides enough carbs to stop your muscles from breaking down, and will jump-start growth. You can pair fruit with a lean serving of protein, such as white fish.

One more point to make here: By “workout” we mean weight training. You don’t need to follow any specific menu before or after a cardio session. In fact, as with weight workouts done in the morning, you’ll burn more calories from fat if you avoid eating before a cardio session.

Can I ever cheat on my diet?

Of course. The only way you can sustain a healthy eating plan is by building some leniency into it.

“Plan to have one or two cheat meals. per week,” Miyaki says. These are meals when you can eat whatever and as much as you like, but as soon as you finish, you’re done. Don’t let it go on all day.

Incorporating booze, pizza, or whatever treats you enjoy will keep you on track long-term—not loathing the process.

“Don’t give up any food you love indefinitely,” says Miyaki.

THE FAT LOSS BENEFITS OF MCTS