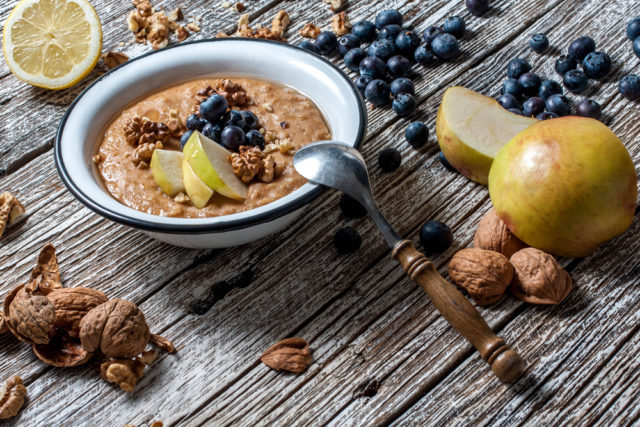 If you rely on your morning (or afternoon) cup of Joe to not only get you out of bed in the morning, but to continue powering you through your day, you’re not alone. In fact, approximately 83 percent of adults drink coffee, according to the National Coffee Association’s 2013 online survey, and most do so an average of three times a day. But coffee and other caffeine-packed beverages aren’t the best thing to reach for when you need an energy lift, according to experts. “Too much caffeine may actually drain energy versus boost it,” says Erin Palinski-Wade, RD, CDE, author of Belly Fat Diet for Dummies. “At a certain point, excess caffeine intake can be a stressor to the body, causing an increase in stress hormones such as cortisol—and these hormones can trigger fatigue instead of boosting energy.”

The best sources of energy from food are packed with protein, carbs, fiber or good-for-you fats that slow down digestion and keep you fuller longer without causing blood sugar spikes. Here are eight nutritionist-approved, caffeine-free snacks that’ll give you the right kind of jolt to keep you moving.

Whether it’s enjoyed first thing in the morning or as a midday snack, a classic bowl of oats is one of the best ways to jumpstart and refuel your day. Thanks to its low-glycemic index and high fiber content, oatmeal takes a while for the body to digest, absorb and metabolize, meaning it will keep you energized all morning or afternoon long. And perhaps the best part? It won’t cause you to crash like other caffeine- and sugar-laden beverages will.

How to have it: “Mix in some magnesium-rich almonds for an added caffeine-free kick,” says Keri Gans, RD, New York City-based nutritionist and author of The Small Change Diet have found that eating more foods with magnesium can boost brain function, keeping you more alert and focused and even enhancing your long-term memory.”

While most of us consider dark chocolate a once-in-a-while dessert, it’s actually quite nutritious. In fact, a single ounce of the dark variety is packed with immune-boosting nutrients and flavonoids, powerful antioxidants that protect the cells that make up your body. “Dark chocolate is rich in theobromine, a natural stimulant similar to caffeine, which can boost energy,” says Palinski-Wade. “In addition, dark chocolate can stimulate serotonin, a mood-boosting chemical messenger, which can provide an added energy lift.”

How to have it Enjoy one ounce as a snack along with dried fruit or mix a tablespoon of dark chocolate chips in with a bowl of air-popped popcorn for a sweet, energy-boosting treat.

You’re probably familiar with the health-boosting benefits of whole grains. In fact, the Whole Grain Council found that eating a diet rich in whole grains can reduce your risk of heart disease by 25-28% and type 2 diabetes by 21-30 percent. But did you know that complex carbs like whole grain bread are some of the best types of foods for prolonged energy? “One slice of bread has 15 grams of carbohydrates, which is our body’s main fuel source,” says Gans. “And with whole grain you also get the added benefits of fiber, which digest slowly and keep your energy up for longer.”

How to have it: Top it off with some peanut butter which packs a serious protein punch—just 2 tablespoons gives you 8 grams of protein and 2 grams of fiber. You’ll be buzzing around sans cappuccino until lunch time.

Beans are packed with the ultimate trifecta of complex carbohydrates, fiber and protein, all nutrients that take a while for your body to digest, which translates to long-lasting energy. “The amount of fiber in beans promotes a slow and steady rise and fall in blood glucose levels,” says Palinski-Wade. “This helps stabilize energy levels.” Beans also contain magnesium, which helps the body relax so it can preserve energy.

How to have it: “Because beans are a great source of plant-based protein, they make an excellent addition to a soup, salad or side dish,” says Gisela Bouvier, a registered dietician and founder of B Nutrition & Wellness. “Black bean soup is a must-try!”

They might not be the first thing that pops into your mind when you’re craving a dose of energy, but if you’re into these salty little suckers, they promise to deliver a quick boost. “Sardines are one of the richest sources of vitamin B12, a nutrient essential for helping to convert food into energy,” says Palinski-Wade. “In addition, the protein content can help to stabilize blood sugar levels while the omega-3 fatty acids may help to reduce fatigue-inducing inflammation.” Sounds like a win all around.

How to have it: Try eating these over hearty salad or even enjoying them alone as a snack. Just look out for the kinds packed in soybean or cottonseed oils. Instead, opt for brands that pack them in olive oil to get even more of good-for-you omega-3 fatty acids.

Almonds are an excellent source of plant-based protein and a healthy dose of heart-boosting fat. They are also jam-packed with nutrients including manganese, copper, vitamin B2 and phosphorus. “Copper is essential in producing energy in the body’s cells, while manganese plays a significant role in fat and carbohydrate metabolism,” says Bouvier. “Vitamin B2, also known as riboflavin, is one of eight B vitamins that help the body convert food into fuel.”

How to have it: Incorporate almonds into your daily diet by keeping them handy as a portable snack, tossing them over a salad or enjoying them in a serving of low-fat or Greek yogurt.

Everyone’s into quinoa these days, but it’s actually been around for thousands of years. Known as an ancient grain, quinoa is one of the most protein-packed foods on the planet, containing all nine essential amino acids. It’s also rich in fiber, complex carbohydrates and riboflavin, which help convert food into energy in the body. “Because of its high fiber content, coupled with the fact that it takes a while to chew and actually swallow, quinoa keeps you fuller for longer, even though it contains fewer calories than other foods that might make you equally full,” says Bouvier.

How to have it: Cook up a cup of quinoa and add it to your salad or mix it into your pancake mix for a hearty, energy-boosting breakfast.

It might sound too good to be true, but sipping on H2O is sincerely one of the easiest ways to up our energy levels. “Nothing wakes you up faster than a tall glass of water,” says Palinski-Wade. And, similarly, nothing tuckers you out than being plain-old dehydrated. “Most of us are dehydrated early in the morning, since we’ve most likely gone 7-8 hours without liquids while we were sleeping, so loading up on water may even give you an even better jilt than a cup of coffee.” Next time you feel yourself nodding off at the work desk, head to the water cooler for a refill.

How to have it: Drink a glass of refreshing cool water with a hint of lemon, lime juice, mint or orange. “The hints of citrus are known to aid in digestion and help flush out bodily toxins,” Palinski-Wade says.

6 WORST THINGS YOU CAN DO TO GET A BIGGER CHEST

THE TRUTH ABOUT 6 COMMON WORKOUT MYTHS