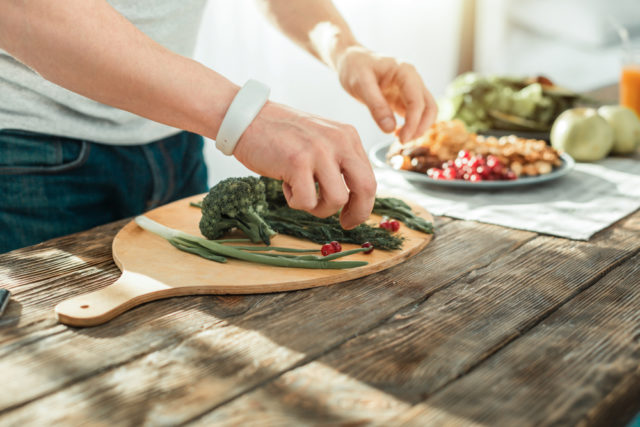 When you want to reduce belly bloat and shed water weight, it all starts with your diet. Regular exercise can help, but if you ramped up your training regimen lately—like starting our Rock Hard Workout—your muscles could still be holding onto water molecules.

We asked nutrition professionals, Torey Jones Armul, M.S., R.D.N, National Spokesperson for the Academy of Nutrition and Dietetics, and the Nutrition Twins—Lyssie Lakatos, R.D.N. and Tammy Lakatos Shames, R.D.N—for the diuretic foods and beverages that can help you cut water weight.

Remember to give your body time to respond to your diet and training routine. “Expect some shifts, natural fluctuations in your body fluid, in your weight,” says Jones Armul. “That’s natural and it’s something that happens all the time.”

Eat these foods, chug these drinks, and soon enough, that “Smedium” shirt you’ve been wearing will show off the hard work you’ve been putting into your abs routine.

“Instead of skipping beverages when you feel bloated, drink fluids that don’t contain sugar or sodium, like tea, to help flush bloat,” says Lakatos. Typically, when your body retains water (assuming the water retention is not from a health issue) it’s holding on to fluid to dilute sodium or sugar, she says.

Although drinking more fluid may seem counterintuitive, it flushes out the excess sodium or sugar along with the water those molecules are attracting. Add a slice or two of lemon to your water or tea, since it contains potassium, which helps counteract sodium by “rinsing” it out of the body, Lakatos says. “Lemon water may help improve overall digestion, reducing bloat thanks to the citrus flavonoids in the lemon that aid the acid in the stomach in breaking down food. Warm lemon water seems to aid digestion the most,” she says.

Staying hydrated will also reduce that bloat. “Dehydration can actually kind of [cause] your body to retain water because it’s not getting any coming in,” says Jones Armul. “So staying hydrated and kind of keep that cycle moving can help [cut water weight].”

This summertime favorite fruit is a great source of potassium and water (it’s 92% water!), and both are important when it comes to flushing bloat, says Lakatos Shams.  “Potassium helps to counteract sodium, which most Americans consume in excess and the result is water retention as the body attempts to dilute the sodium,” she says. “Getting more potassium helps the body excrete the sodium and the fluid it’s holding onto along with the sodium.”

“Coffee is a known diuretic because of the caffeine content, it helps to kind of excrete some water,” says Jones Armul. “That’s diuretic that is healthy in moderate amounts. They say about two or three cups of coffee a day can have that effect and that’s still kind of be in the ‘safe’ zone of a healthy caffeine intake and coffee intake,” says Jones Armul.

This fruit contains the magical combination of water and potassium, which helps flatten your stomach by flushing excess sodium, water, and bloat from your body and belly, says Lakatos Shames. “Plus, they’re packed with fiber, so you’ll say goodbye to constipation and the puffiness that comes with it,” she says. They’re also super low in calories—and carbs—so you can fill up on them without gaining weight, says Lakatos Shames.

You’ve probably heard before that ginger is good for digestion. That’s because ginger is a potent anti-inflammatory, reducing inflammation in your colon, helping to settle and calm an upset stomach, easing distention, gas, and bloat, says Lakatos. Ginger also contains zingibain, a digestive enzyme that helps break down protein. A study found that ginger speeds digestion, helping your stomach empty faster and moving gas through to dissipate bloat.

This spice is said to help boost your metabolism, thanks to the capsaicin in it, says Lakatos. That neuropeptide-releasing agent also increases digestive enzymes in the intestines, reducing gas and bloat.

What used to be a strange-sounding product to the majority of Americans has become better-known due to the increasing buzz around the benefits of probiotics, which this yogurt drink is chockfull of. “It’s great source of probiotics, which are good bacteria that help ease stomach distention and bloat by creating a healthy balance of good bacteria and bad bacteria,” says Lakatos Shames. “By keeping the harmful bacteria at bay, you’ll have less stomach distention and bloat.”

“These yellow-hued seeds fight bloat and gas thanks to anethole, fenchone and estragole, compounds in fennel that have antispasmodic and anti-inflammatory properties that relax the intestines and help it to release trapped gas,” says Lakatos. Keep in mind that “trapped gas” needs to go somewhere when you’re eating these foods that help you cut water weight.

Don’t worry about getting rid of gas-inducing cruciferous vegetables—like broccoli and cauliflower—when trying to drop water weight. “I wouldn’t cut down on vegetables to try to drop some water weight,” says Jones Armul. “I think first of all, nutrition-wise, you’re better off having more fruits and veggies and maybe retaining a little bit more water. But I would say the first goal should be having a healthy and nutritious diet, so I recommend as many fruits and vegetables as people are willing to eat,” she says.

“Instead of cutting out broccoli [to shed water weight], spend your time watching the simple carbs,” she says. Remember, carbs are converted to glycogen, which causes the body to store more water.

FOODS THAT HIT THE ‘RESET’ BUTTON