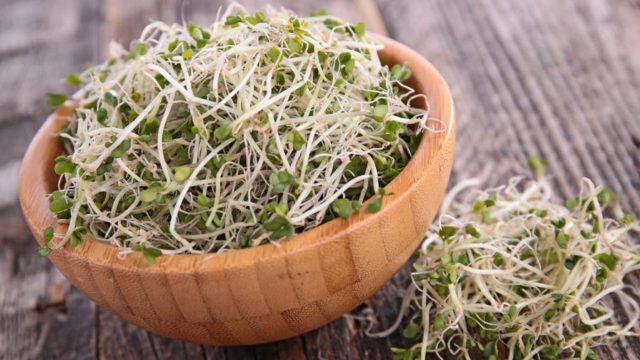 BIG HEADS OF broccoli have been semi-liberated from the “ewww, gross” realm of foods now that people realize just how healthy the cruciferous veggie is—and also learned they don’t have to boil it for 20 minutes to cook it properly. In past studies, the phytonutrients that make up broccoli have been linked to reducing inflammation in the body, which can help prevent cancer, and a new study that looked at broccoli sprouts discovered that the same compounds may even battle obesity.

Scientists from Kanazawa University in Japan tested sulforaphane—the main phytochemical shown to have antioxidant effects—on mice who were given a high-fat diet. Another group of mice was just fed the high-fat food minus the compound. The results showed that the mice who had the sulforaphane supplementation gained weight at a rate 15% lower than the other mice, and they also had a 20% reduction in visceral fat, which is the kind that surrounds organs and is tied to high levels of inflammation.

The other discoveries in the study were that the phytochemical works to fight obesity by turning white fat into brown, which hikes up metabolism and burns more fat, and that it bolsters populations of beneficial bacteria in the gut that can be harmed by a high-fat diet. The study authors stated that these two new roles sulforaphane plays in the body could help lessen liver inflammation, eliminate insulin resistance, and prevent other lifestyle diseases like heart disease and diabetes.

HOW TO GET MORE MOTIVATED TO STAY FIT

How to incorporate sex toys into your favorite sex positions

THE 10 GROOMING ESSENTIALS EVERY GUY NEEDS FOR SUMMER