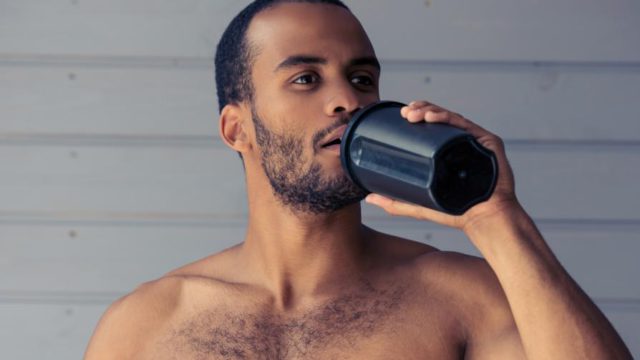 YOU TAKE A pre-workout supplement to score perks during your sweat session—so what’s with the headaches, the itchiness, and/or the GI distress? Studies show that pre-workout supplements are safe for short-term use, and they do indeed add perks to your performance. But considering they’re a combination of every ingredient but the kitchen sink, it’s no surprise your body may feel a little irritated by certain blends.

The fix may be as simple as ingesting it with more water or narrowing in on a better brand for your body. So we tapped Lonnie Lowery, Ph.D., R.D., associate professor of exercise physiology and nutrition at the University of Mount Union in Ohio to help determine what exactly is causing the most uncomfortable offenses.

The specific vasodilator is typically the amino acid arginine, which increases nitric oxide in the body. The idea behind including this is that at rest, a large part of your vascular beds are closed. If you open them up, in theory, you could take in nutrients or remove waste products better because you have more blood circulating. Some pre-workouts claim this may actually have anabolic effects and can cause muscle growth. But, if you keep getting headaches, see your doctor and consider switching to a supp that doesn’t have this ingredient. (Though note that it might have other vasodilators that could cause the same problem.)

It depends on the formula, but many have vasodilator compounds in them, or ingredients that cause your blood vessels to expand, explains Lowery. This dilates, among others, the blood vessels in your head, which can cause a headache.

Why does my pre-workout keep me from sleeping hours later?

Pre-workout supplements are loaded with caffeine to give you the energy to power through a workout. We all know caffeine itself will keep you awake, but it also activates epinephrine and norepinephrine—those fight or flight hormones—which will keep you wired as they course through your body. The half life of caffeine (how long it lasts) is typically three to five hours, but there’s a genetic difference among the population with how quickly people metabolize it. Pretty much everyone will have trouble sleeping if they take a caffeine-heavy pre-workout supplement before an evening workout. But if you’re slow at metabolizing it, you don’t clear it out of your system as quickly and even ingesting it at lunchtime could affect your sleep.

Why does my pre-workout make my hands and feet tingle?

There’s two ingredients included in a lot of pre-workout blends: beta-alanine, which is a muscle acidity buffer, and niacin, or vitamin B3. There is some solid research that the first can help you crank out reps without too much burn building up. But some people—myself included—are very sensitive to beta-alanine and feel tingling as a result. It’s a harmless nervous system reaction, not an indicator of toxicity or anything worrisome, but still uncomfortable.

Niacin, on the other hand, at high doses like the 500+ mg in many workout supplements, causes a flush. Your skin gets red and splotchy and you feel tingly or even itchy. Some manufacturers may actually include it for that effect, because when you combine that tingle with caffeine, someone working out will feel a very dramatic effect of the supplement. But science actually shows niacin potentially blocks fat mobilization, so if you want to burn fat—which most people do during any kind of workout—you want a pre-workout supplement without the ingredient anyway.

Why does my pre-workout give me the runs?

It may be a reaction to some of the various herbs in the products, but what I see even more often is that this is the result of not mixing the powder with enough water. And it’s not the user’s fault—most directions will say to mix the formula with 8 ounces of water, but that’s only enough to create a thick paste. When you ingest that, your body starts to pull water from your cells so that it can actually process it. But when the water is drawn through the intestinal wall, it floods the open space of the intestines because of osmosis. Too much water in your intestinal cavity equals diarrhea. Luckily, you can solve this just by mixing the formula with more water before you drink it.

Why does my pre-workout make me nauseous?

This is either because it isn’t diluted enough, like the issue with diarrhea, or there’s a single ingredient in the formula you can’t tolerate. Unfortunately, that gastro-irritant could be anything—it’s highly individual. Try diluting it in more H20 than the label says. And if that doesn’t help, then you know it’s an herb or chemical in the formula.

ARMY OF TWO: HOW TO CHOOSE A TRAINING PARTNER